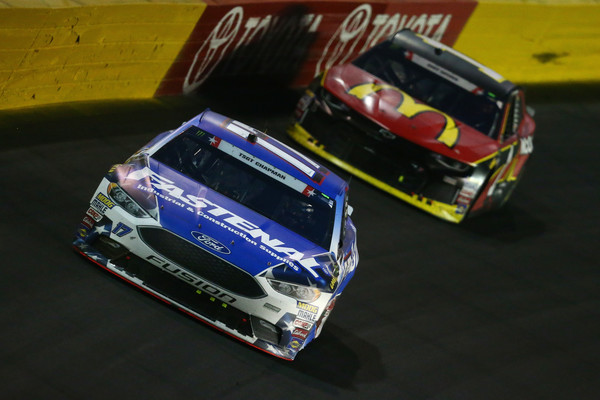 At the same track that he made his first Monster Energy NASCAR Cup Series (MENCS) start at in 2011, Ricky Stenhouse Jr. overcame adversity to score a career best 10th-place finish at Charlotte Motor Speedway.

“I’m really happy,” Stenhouse said. “I think we were a little concerned, even though the package wasn’t the same as the All-Star Race, I feel like we made some gains for the mile-and-a-half program this year.  I felt like this is about where we were last year at this time, so for us to start the year off from where we did last year, I feel good that we’re headed in the right direction.

“It’s never as fast as you want.  It was a tough battle for us out there.  Our Fastenal Ford was really good the first two stages and made an adjustment and was off for two runs – a full stage and had to fight back to get that track position.  All in all, it was a good day to come back.”

After barely missing advancement to round three of qualifying, the Olive Branch, Miss. native lined up for the longest race of the season in the 13th position and patiently maneuvered his tribute Fastenal Ford up to 10th by the time the first caution flag waved on lap 36. Despite battling a loose handling condition for a majority of stage one, Stenhouse was able to earn a ninth-place finish earning valuable stage points.

The two-time Xfinity champion was scored in the 10th position when the caution flag waved on lap 121. With a majority of the cars pitting that were scored behind the No. 17 Fastenal Ford, Stenhouse dropped to 21st position due to his competitors having fresher tires.  With 45 laps remaining in stage two, Stenhouse brought his Ford to pit-road for a scheduled green flag pit-stop. The remainder of the stage went caution free allowing Stenhouse to gain seven positions by the time the green-checkered waved.

Lacking overall grip, the 2017 MENCS Playoff contender made contact with the outside wall losing a few positions midway through stage three. Luckily, a caution flag was displayed shortly after Stenhouse had to serve a pit-road speeding penalty lining him up at the tail-end of the field. With a 15-lap shootout to the end of stage three, the Roush Fenway Racing driver marched his way through the field picking up 11 positions by the end of the stage, scoring additional valuable stage points with a ninth-place finish.

Unfortunately, during the stage break, the team was penalized for an uncontrolled tire lining Stenhouse up once again at the tail-end of the field. After restarting in the 24th position, Stenhouse patiently maneuvered his Ford through the field gaining 14 positions to take the checkered flag in the 10th position; a career best at the 1.5 mile track.