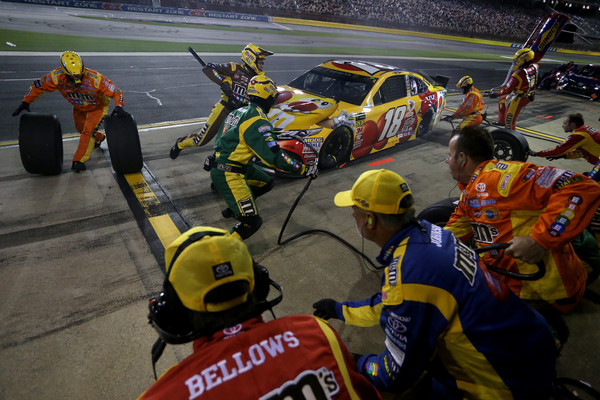 ● The M&M’S Red Nose Day driver raced his way up to sixth by lap nine.

● He continued “playing the aero game” and by lap 19 was up to the third position, gaining on the leaders.

● Busch noted at lap 28 that he thought he had “the best-driving car” and that his Toyota was “better than the No. 4.”

● The M&M’S Red Nose driver ended the segment in third.

● The 2015 NASCAR Cup Series Champion started Stage 2 in the lead after a speedy stop by the M&M’S Red Nose Day team following Stage 1.

● Busch noted it was “free compressing” into turn four with five laps remaining in the stage as he continued to maintain the top spot.

● The M&M’S Red Nose Day team dominated Stage 2, losing the lead to Jimmie Johnson for less than a lap seven laps into the segment.

● Busch pitted in between segments for four tires and fuel, losing one spot on pit road to Brad Keselowski, who opted to only take two tires.

● The M&M’S Red Nose Day driver was shuffled back to fifth on the restart, but he worked his way up to fourth by the time the caution was displayed seven laps into the stage.

● Adam Stevens, crew chief for the No. 18 team, opted not to bring Busch down pit road after the lap-56 caution. Busch restarted fourth with 11 laps remaining in the stage.

● An accident brought out the caution with just two laps remaining in the stage. Busch noted he was battling with a tight-handling condition in traffic and opted to pit for four tires and fuel, forcing him to restart 12th.

● Busch was collected in an accident not of his own fault on the final laps of the stage that caused significant damage to the left and right front of the body and splitter. He restarted at the end of the field.

● The M&M’S driver was the only competitor to come to pit road for tires prior to the final stage.

● An accident with two laps remaining in the race halted green-flag action while Busch was running in the 11th position. The M&M’S Red Nose team opted not to pit in order to maintain track position.

● Busch led 19 laps of Saturday night’s All-Star Race to bring his total laps led to 256 in the non-points event.

“Bummer we got caught up in that tonight. We had a good M&M’S Red Nose Day Toyota the majority of the night, fell back there a little bit and then just had nowhere to go when those guys got together in front of us. We’ll come back here next week and see if he can’t get a lot better run with our M&M’S Toyota. ”

Next Up: The Monster Energy NASCAR Cup Series returns to points-paying racing on Sunday, May 27, with the Coca-Cola 600 at Charlotte. The longest race on the Cup Series schedule gets underway at 6 p.m. EDT with live coverage provided by FOX.