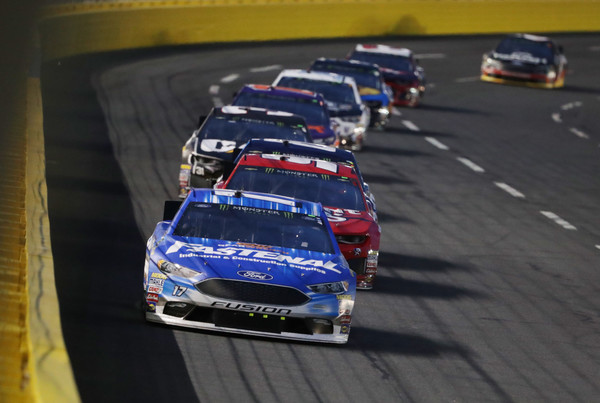 With a million dollars on the line, Ricky Stenhouse Jr. lined up on the outside of the front row beside teammate Matt Kenseth but an ill-handling machine forced him to settle with an 11th-place finish in Saturday night’s Monster Energy All-Star race.

“Our car struggled with this package,” Stenhouse Jr. said. “It was a bummer we couldn’t take that front row start and do something with it. I wasn’t really a fan of this package but I’m sure the fans enjoyed it because we were all close together. Overall, I just wish we could have capitalized on our front row starting spot.”

With the unique qualifying format where each car is required to make three laps and a four-tire pit stop, Stenhouse held the top spot until teammate Matt Kenseth and No. 6 team knocked him off the pole making it an Roush Fenway Racing front row for the four stage, 80-lap feature.

With a new rules package for the non-points race, the Olive Branch, Miss. native led five laps before losing a couple of positions in the first segment due to a tight-handling condition. During the break after segment one, crew chief Brian Pattie took a big swing at the Fastenal Ford.

Despite major changes, Stenhouse was still battling a tight-handling condition for majority of the second stage. He decided to drop to the back as the field was getting dicey for the 20-lap segment.

During the stage break, the two-time Xfinity champion brought his Fastenal Ford to pit-road for four tires and another big swing to help address the front turn issue. After restarting in the 19th position, Stenhouse battled his way up to the ninth position before a caution came out setting up a green-white-checkered for the end of stage three.

Before taking the white flag on the green-white-checkered, a multi-car accident occurred bringing out the caution just shy of the end of stage three sending the stage into overtime.

Next up for Stenhouse and the No. 17 team is the Coca-Cola 600 at Charlotte Motor Speedway on Sunday, May 27. Race coverage begins at 6 p.m ET on FOX. Coverage can also be heard on PRN and SIRIUS radio channel 90.