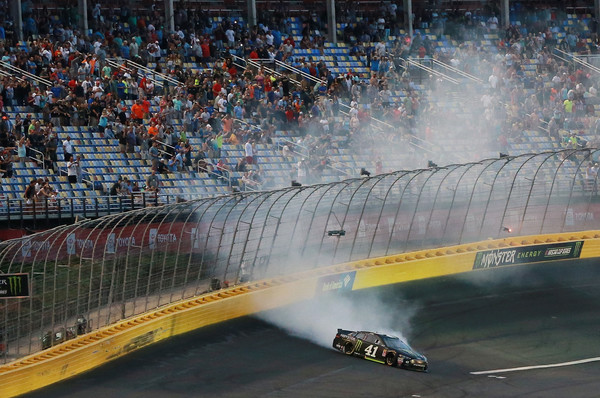 ● Busch started 15th, but a spin on just the second lap sent him backward into the turn four wall. He finished the stage in 21st.

● The impact caused minor rear-end damage to the No. 41 Monster Energy Ford Fusion.

● Repairs were made on pit road during the subsequent caution, allowing Busch to complete the stage.

● Busch finished one lap down, but took the wave-around and earned his lap back before pitting.

● Busch radioed that his No. 41 Monster Energy Ford Fusion was “still pretty loose” as the stage drew to a close.

● Crew chief Billy Scott called for significant changes during the four-tire pit stop at the end of the stage, one of which was a massive left-rear wedge adjustment.

● Busch started 20th and finished 18th after getting collected in a multicar accident.

● A caution period on lap 57 allowed Busch to pit for four tires and fuel with another series of chassis adjustments.

● When the race returned to green on lap 59, Busch remained in 20th, but climbed to 12th before another caution flag waved.

● While others used the caution to pit, Busch stayed out to gain track position. He was eighth for the restart.

● The well-earned track position went for naught when Busch was collected in a crash three laps from the end of the stage.

● With his No. 41 Monster Energy Ford Fusion too damaged to continue, Busch was forced to the garage.

● This was Busch’s 17th career start in the Monster Energy NASCAR All-Star Race. Harvick and Matt Kenseth are the only active drivers with more All-Star Race starts.

The next event on the Monster Energy NASCAR Cup Series schedule is the Coca-Cola 600 on Sunday, May 27 at Charlotte Motor Speedway. The race starts at 6 p.m. EDT with live coverage provided by FOX beginning at 5:30 p.m.