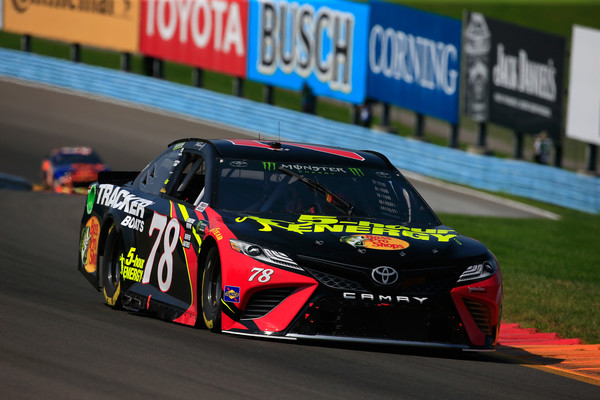 A hard-charging Martin Truex Jr. came up a little short, finishing second to first-time winner Chase Elliott in Sunday’s NASCAR Cup Series road race at Watkins Glen International.
Truex was shooting for his third straight road-course win, but ran out of fuel on the final lap as he was only a few car lengths behind Elliott, who also ran out of fuel but on the cool down lap.
The only two drivers who have won three straight on road courses are Jeff Gordon and Tony Stewart.
Truex was steady all day during the 90-lap race on the 2.45-mile, 7-turn circuit. He ran in the top five for the majority of the race in his No. 78 5-hour ENERGY/Bass Pro Shops Toyota. The race strategy by crew chief Cole Pearn and the over-the-wall pit crew performance were equally impressive.
The Furniture Row Racing driver started fourth and won the first stage, picking up an all-important playoff bonus point plus 10 championship driver points.  He remains third in driver and playoff points.
The result was Truex’s 15th top five and fourth runner-up in 22 races this season.
“I gave it everything I had for our guys, Bass Pro Shops, 5-hour ENERGY, Toyota, and all of our partners,” Truex said. “I gave it everything I had every single lap. I could catch him (Elliott) but right when I got close, I’d get loose and fall back. I was too loose all day. Traffic made it worse for sure.
“He had the upper hand there at the end. We were a little faster but hats off to him. He did a great job. He put his car exactly where I needed mine to be. I couldn’t get it and I was sideways. Congrats to him on his first win. We ran out of gas on the last lap anyway, so I guess it wouldn’t have mattered. I’m proud of my guys. I am proud of the effort. I love coming to these road courses.”
Truex did come close to passing Elliott on the last lap.
“I got sideways and about went through the grass, and then lost five car-lengths,” Truex explained. “That’s how far back I was there. If I hadn’t slipped there, I might have been able to take advantage for sure and got by him but I ran out of gas, so he would have won regardless. Good job by those guys.”
Positions 3-10 went to: Kyle Busch, Daniel Suarez, Erik Jones, Kyle Larson, Jamie McMurray, William Byron, Kurt Busch and Kevin Harvick.
There were nine lead changes among five drivers (Truex led four laps) and four cautions for 11 laps.
The next race is Sunday Aug. 12 at Michigan International Speedway in Brooklyn.
FRR PR/Photo Credit Chris Trotman/Getty Images