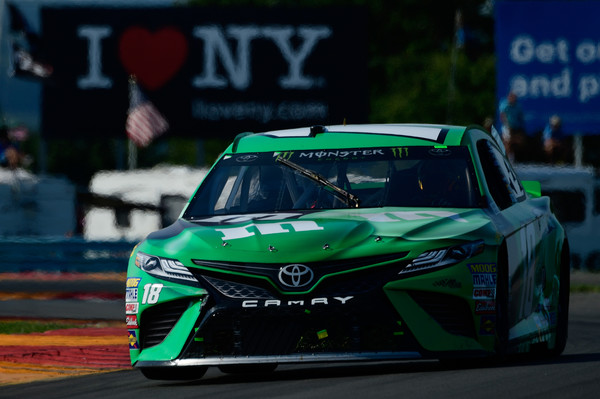 ● The No. 18 M&M’S Crunchy Mint Toyota was the talk of the garage during the race weekend, and Busch set out to show everyone why from the drop of the green flag. He challenged leader and teammate Denny Hamlin through every turn through the first lap and finally secured the top spot through the S turns on lap two.

● The race was slowed by a caution on lap three. The No. 18 team stayed out during the caution period and was in first place when green-flag racing resumed on lap five.

● A number of teams elected to make pit stops during green-flag race conditions on lap 17. This would enable them to stay out during the stage break and have better track position for the start of Stage 2.

● Busch made a scheduled pit stop on lap 18 for four tires and fuel. While it eliminated him from contention to win the stage, it did place him in position to lead at the start of Stage 2.

● A couple of drivers challenged Busch for the lead as soon as the green flag waved for the start of Stage 2; he spent the first laps of the stage fending off the advances first of Hamlin and then of driver Chase Elliott.

● Busch was passed for the top spot on lap 27. He settled into a comfortable pace in second place, keeping the leader in view.

● Halfway through Stage 2 the 2015 NASCAR champion provided the first feedback on his racecar’s handling, reporting that the No. 18 was handling on the tight side in the center of the turns.

● Busch was in second place at the conclusion of Stage 2. The team stayed out during the break because they were not in their fuel window to make it to the end of the race.

● As the field entered turn one to start Stage 3, the race leader took the turn wide, allowing Busch to take advantage and reassume the top spot. He maintained the lead until a full-course caution was displayed on lap 53.

● The timing of the caution worked to the favor of the M&M’S Crunchy Mint Toyota team, as it placed them within their fuel window. Busch led the field down pit road, where his team changed four tires, made air pressure adjustments and added fuel. Quick pit work resulted in Busch retaining first place.

● An issue with the gas can, however, resulted in Busch having to make an extra trip down pit road for fuel. This placed Busch deep in the field, restarting in 31st place on lap 58.

● Busch was able to race his way back among the top-five as the laps wound down and was in third place when the checkered flag waved.

“I had a fast M&M’S Crunchy Mint Toyota; did a good job behind the wheel, I guess. It doesn’t show anything for the result that we wanted to get. Two years in a row here, we had pit-road miscues, and I guess it’s just called bad luck. It’s kind of frustrating when you know you come here every year with a vengeance to go out here and win this race. You’re arguably the fastest guy and not able to perform or execute, I should say. The performance was awesome. I can’t say enough about Chase Elliott and the No. 9 team. They had a great racecar. I told everybody prerace, told everybody yesterday in the media center to look out for the 9, and I was right. I wish that we could have raced with him a little bit there. Obviously, congratulations for his first win. That’s pretty cool. He passed me there in the midpoint of the race. He had me under pressure, had me loose, and I had a couple bad exits, so gave way to him – let him have it and tried to hang with him, and he drove away from me. Then on the next restart, we got in front of him and drove away from him, so I think we were pretty equally matched.”

Next Up: The next event on the Monster Energy NASCAR Cup Series schedule is Consumers Energy 400 on Sunday, Aug. 12 at Michigan International Speedway in Brooklyn. The race starts at 2:30 p.m. EDT with live coverage provided by NBCSN.