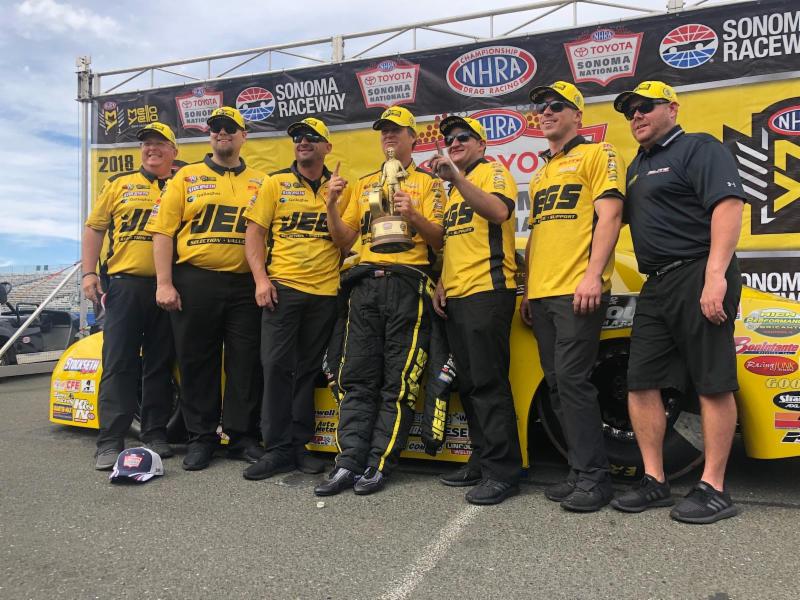 Six-time NHRA champion Jeg Coughlin Jr. had a big Sunday at Sonoma Raceway, winning his third Pro Stock race of the season, moving into the top five of the Mello Yello championship points, and reaching the 80-win mark for his career.

Coughlin used his powerful JEGS.com/ElitePerformance Chevrolet Camaro to beat Fernando Cuadra, Elite teammate Alex Laughlin, points leader Greg Anderson and Deric Kramer to match previous Pro Stock wins this year in Chicago and Bristol, Tenn. This was also Coughlin’s third win in the wine country, having secured titles here in 2003 and 2010.
“What about this Elite team?” Coughlin said. “Richard Freeman (team owner), Rick and Rickie Jones, Brian ‘Lump’ Self, Mark Ingersoll (crew chiefs), the entire team, everybody on both the red and yellow cars. We’ve been thrashing for a couple of years but never gave up.
“What a great group of people to race with. We’ve got great chemistry and we enjoy racing together. We enjoyed racing together when we didn’t run so well and I can promise you one thing, we enjoy racing with wins like today in front of a sold-out crowd.”
The first two rounds were relatively easy for Coughlin, as he beat Cuadra with a 6.537 at 211.96 mph to Cuadra’s 6.582 at 208.97 mph and Laughlin with a 6.534 at 211.43 mph to Laughlin’s 6.563 at 210.28 mph.
Then things got serious with longtime rival Anderson in the other lane. In the history of the class, the two drivers have met more than any other pairing, with Anderson holding a 53-41 lifetime record. But Coughlin got one back Sunday, chasing down and passing Anderson to win by a scant .007 seconds, or about half a foot. Coughlin’s 6.548 at 211.13 mph just enough to beat Anderson’s 6.554 at
212.43 mph.
Coughlin’s duplicated his margin of victory over Anderson in the final round with his 6.532 at 212.16 mph besting Kramer’s 6.534 at 210.54 mph. Kramer uses motors from Anderson’s KB Racing camp.
“They’ve been doing a good job the last couple of weeks,” Coughlin said, referencing the KB Racing cars, “but we just stayed on our game and ran really well today. We had a little help from our competitors early on, I was driving okay all day, and we ended up here in the winner’s circle, which
is unbelievable.
“It feels great winning Sonoma again. It’s been a couple of years. My son, Jeg III is here and that’s fun. I think the last race we won together was in 2009. I couldn’t be happier and more proud to win this race for the entire Elite team. There are five cars under the Elite umbrella and we stuck it to them this weekend, which feels great.”
Of Coughlin’s 80 career victories, 61 have come in Pro Stock and 19 in various Sportsman categories.
The JEGS.com/Elite Performance race team will quickly turn their attention to next weekend’s 31st annual CatSpot Organic Cat Litter NHRA Northwest Nationals at Pacific Raceways in Seattle. Coughlin previously won the event in 2002.
Team JEGS PR/Photo Credit Team JEGS