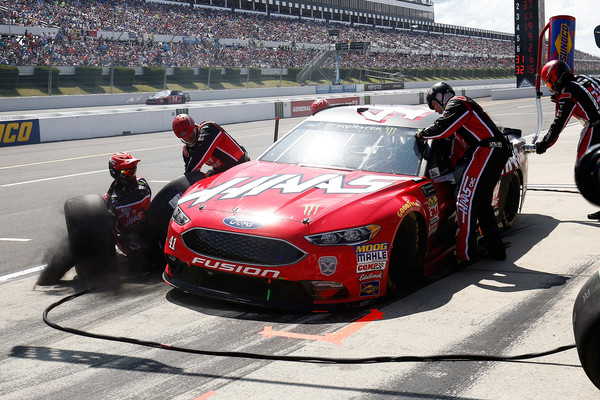 ● The Haas Automation driver said the car was loose in and tight off on lap 14. He was running seventh.

● Busch pitted on lap 34 for four tires and fuel. He was leading when he pitted and came out 12th.

● On lap 54 Busch pitted and took right-side tires and fuel.

● The No. 41 Haas Automation Ford Fusion pitted on lap 67 for four tires and fuel.

● Busch pitted on lap 84 for four scuffed tires, fuel and a wedge adjustment. He said the car was just too tight.

● The car returned to pit road on lap 86, as there was an issue on the previous stop with the front air gun. The team used a different air gun to make sure the lugnuts were tight, and Busch restarted 24th.

● Busch pitted for four tires, fuel and a wedge adjustment.

● On lap 112 a left-front tire was cut, which forced Busch to pit road for four tires and fuel. He came out in 31st place, one lap down.

● Busch pitted on lap 128 for four tires, fuel and some minor damage repair. He restarted in 30th.

●  Kyle Busch won the Gander Outdoors 400 in overtime to score his 49th career Monster Energy NASCAR Cup Series victory, his sixth of the season and his second at Pocono. His margin of victory over second-place Daniel Suarez was 1.788 seconds.

●  There were seven caution periods for a total of 29 laps.

●  Twenty-eight of the 40 drivers in the Gander Outdoors 400 finished on the lead lap.

“We have nothing much to show for the effort, but we do have a lot to show for it at the same time by going through all that adversity. I didn’t think we would get a top-10 out of today with the damage on the splitter. The left-front tire was weird. It blew out halfway down the front straightaway, and I was able to keep it off the wall and keep most of the damage to a minimum. The guys were able to fix me up, and we just kind of battled through and took advantage of other people’s mistakes. Thanks to Haas Automation, Monster Energy and Ford.”

The next event on the Monster Energy NASCAR Cup Series schedule is the Go Bowling at The Glen on Sunday, Aug. 5 at Watkins Glen (N.Y.) International. The race starts at 2:30 p.m. EDT with live coverage provided by NBC. Pre-race coverage begins at 1 p.m. on NBCSN.