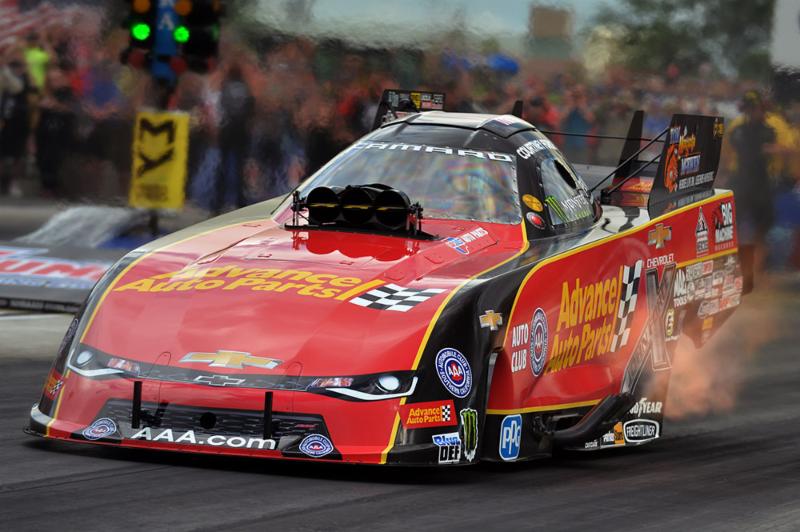 Courtney Force and the Advance Auto Parts team have shown no signs of slowing down. They have a 250-point lead in the NHRA Mello Yello points standings, have qualified No. 1 eight times and earned four wins in five final round appearances. Now they head to New England Dragway for the sixth annual NHRA New England Nationals, an event Force has continually had success at.
In the event’s five-year existence, Force has had two final round appearances including a win at the inaugural event in 2013 and a runner-up finish at the 2017 race. She has qualified inside the top eight all five years and was the No. 2 qualifier in 2017 after her Advance Auto Parts Chevrolet Camaro SS Funny Car had a highlight reel explosion during Friday qualifying. Despite the fireworks, Force was the preliminary leader at the end of the day and, come race day, was only second to teammate Robert Hight. She raced her way to the final round and nearly had a double-up win with sister Brittany Force.
“I’m looking forward to being back in Epping, N.H. with this Advance Auto parts team. This is the track that we won the inaugural event at,” Force said. “Last year, we were No. 1 qualifier on Friday after a huge explosion during Friday qualifying. We were really able to make a strong comeback and take our team all the way to the final round that weekend. We almost sealed the deal last year so we’d really like to get it done this weekend.
“Last year was even more exciting because this was the same track that Brittany was able to win the event at. It was close to our first sister double up. We’d really like to have that opportunity again,” Force continued. “We know that her Monster Energy team knows how to run that Top Fuel dragster down the track and our Advance Auto Parts team has really had some strong runs this season. We’re really looking forward to going back to New England, hopefully going rounds again and hopefully this year we can make it happen with a sister double up.”
Despite the momentum and the confidence Force has in her Advance Auto Parts Chevrolet Camaro SS and in her team, she knows that things can change quickly and the end of the season is what matters.
“It’s been a great start to the season for the Advance Auto Parts Chevy Camaro team. I’m really proud of my guys. They have been really fighting hard and they have a good thing going. I’m really excited with the direction our season is going. We’re just trying to keep our heads straight, staying focused round by round. We’ve had a few wins and we’re in a really good spot obviously being in the points lead right now but continuing to just focus on getting the bonus points. Everything resets right after Indy, so we’re just trying to stay focused and learn a lot about this car. We have a long season to go and just really excited how everyone on my team has jelled right now.”
The NHRA New England Nationals begin with two qualifying sessions on Friday at 5 p.m. and 7:30 p.m. and an additional two rounds of qualifying on Saturday at 2 p.m. and 4:30 p.m. Eliminations are slated to begin Sunday at 11 a.m. at New England Dragway.
JFR PR/Photo Credit Auto Imagery
Post Views: 187