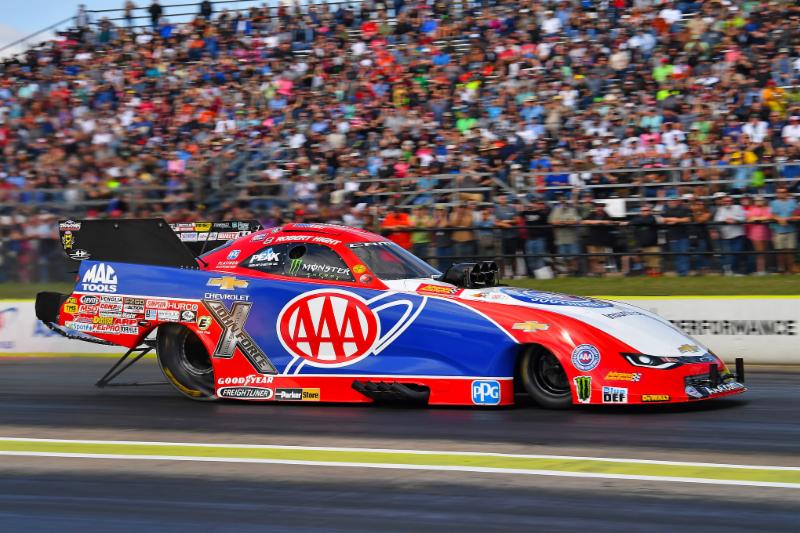 After making adjustments to his AAA of Northern New England Chevrolet Camaro SS before the Norwalk, Ohio race, reigning world champion Robert Hight is looking forward to the second half of the 2018 NHRA Mello Yello Drag Racing Series season beginning with the NHRA New England Nationals at New England Dragway.
“We were running bigger cylinder heads, a different camshaft and a different supercharger to start the year because we were trying to go faster and set records,” Hight said. “(Crew chief) Jimmy (Prock) decided to go back to what we ran last year, the same stuff Courtney’s running right now, because with the NHRA’s new track prep, we just can’t run as hard as we want to.”
Hight has three runner-up finishes, the season opening event in Pomona, Calif., Houston, Texas where he had his only No. 1 qualifier of the season and Topeka, Kan., where he lost to teammate Courtney Force before picking up his first win of the season in Chicago. Despite the bit of success on race day, Hight is ready for more consistency throughout the weekend and is confident they’ll find now that they’ve adjusted.
“I have a lot of confidence because we ran this same combination all last year,” Hight said. “It’s not like we’re putting something foreign in there. (Brian) Corradi (co-crew of Courtney Force’s Advance Auto Parts Chevy) and those guys took what we had over the winter and that’s what they’ve been running. They’re going to be hard to catch but I don’t want them to slow down. We’re fourth now and we still have plenty of time before the Countdown.”
After the most recent event in Norwalk, Hight and his team took advantage of the opportunity to test.
“Testing went well. We made several passes, had a chance to work on some things, and by the end of the day were happy with what we had,” explained Hight.
Now fourth in points, Hight, who owns the New England Dragway speed record after running 334.65 mph at last year’s event, is looking for his first win at the venue. He’s qualified No. 1 twice, including in 2017 and 2014.
“Racing at New England Dragway is always great. The fans are amazing and I’ll be representing our AAA of Northern New England partners,” Hight said. “The stands are always packed and I’ll be looking forward to getting that first win there. It should be an exciting weekend.”
The NHRA New England Nationals begin with two qualifying sessions on Friday at 5 p.m. and 7:30 p.m. and an additional two rounds of qualifying on Saturday at 2 p.m. and 4:30 p.m. Eliminations are slated to begin Sunday at 11 a.m. at New England Dragway.
JFR PR
Post Views: 323