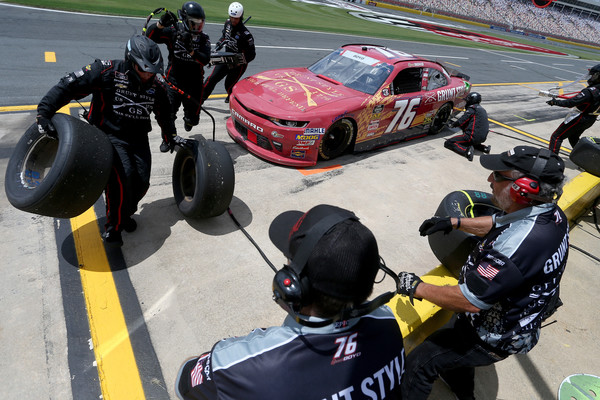 After a few off weekends, the NASCAR XFINITY Series was back in action this weekend at Charlotte Motor Speedway. Today’s Charlotte race marked exactly one third of the way through the season for the XFINITY Series. It also was a milestone race for Boyd, as it marked Boyd’s twenty-fifth career NASCAR start in his young career.

After threatening skies this morning, NASCAR was able to complete qualifying and Boyd would roll off from the 33rd position. When the green flag flew Boyd instantly had his hands full. Caution flew early on lap 22. Boyd reported that the car was “wrecking loose.” After some positive adjustments by Crew Chief Jason Miller and crew, Boyd found himself battling for “the lucky dog” at the end of the first stage. As the green and checkered flag flew, Kyle Busch won the first stage and Boyd received the free pass for being the first car a lap down.

As the second stage got underway, spotter Hayden Reeves told Boyd he just ran his fastest lap of the day on lap 57. Boyd was overall happy with the adjustments made, but was still fighting a loose handling car. On Lap 79 caution was again displayed for the 0 car spinning around. The Grunt Style Gladiators serviced Boyd with 4 tires, fuel, and a slight adjustment. Kyle Busch won the second stage and Boyd would just miss the free pass this time.

The Final stage was full of action. Boyd managed to work his way up to 28th and again put himself in position for the free pass, but no luck. Boyd fought tooth and nail all day to get in position to get back on the lead lap until finally with 45 to go, the caution fell Boyd’s way. With 40 laps remaining Boyd found himself on the lead lap up in the 23rd position. After a fantastic restart, Boyd ran all the way up to the 18th position before a heavy rain shower would force a red flag. After a lengthy delay, the race restarted with only 24 laps remaining. Boyd fought hard and brought home the Marine schemed Grunt Style, Calcutta Outdoors Chevrolet a career best 21st position.

After the race Boyd reflected, “What an unbelievable day today. I can’t find the words to describe how thankful I am. Our team has gone through so much these last few weeks, so to have a run like this today feels like a win. I can’t thank Grunt Style, Calcutta Outdoors, Strike Force Energy, and Trident Mechanical Systems enough for being on board this week. To be able to honor our great military with this special Marine scheme this weekend and have such a great run means the world to me. There was definitely some special people riding with me today.”

After a fantastic run, Boyd moves back into the top 30 in points. Boyd will be out signing autographs and cruising the campgrounds tomorrow with Calcutta Outdoors for the 600. The team will have a quick turnout around as they begin to set their sights on Pocono.