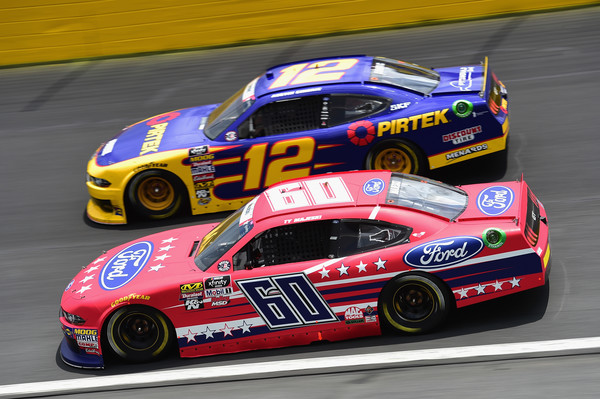 Ty Majeski had a solid run going late in the NASCAR Xfinity Series race at Charlotte, but a series of misfortunes spoiled what looked to be a solid finish as he crossed the stripe 22nd.

After rolling off the grid 11th, the Seymour, Wisconsin, native was 14th at the conclusion of stage one, reporting he was having issues getting into the corner due to loose conditions. Crew Chief Mike Kelly and the No. 60 team went to work with adjustments at the stage break, rolling back out 13th to begin the second segment.

Majeski rode around 15th for the next 20 laps, before charging to 11th to end stage two, despite still reporting loose handling conditions. He would restart 13th before light rain fell at the 1.5-mile oval, forcing a caution at lap 126. After a four-tire stop and set of adjustments, Majeski would restart ninth, before another caution waved 20 laps later.

At the break, half of the leaders hit pit road but Majeski stayed out, setting himself up to restart eighth at the lap 150 restart, his highest point of the day. That green-flag run would only last five laps when the team was hit with an uncontrolled tire penalty on the fourth pit stop, forcing the No. 60 to the rear.

Then, as the laps wound down, a caution occurred ahead of Majeski when a damaged car slid up the track and forced his No. 60 Ford into the outside wall. The team would go on to make extensive repairs before and after a red flag that lasted more than an hour due to rain, before Majeski brought home his Ford Mustang 22nd.

The No. 60 returns to the track next Saturday at Pocono Raceway with Chase Briscoe in the car. Race coverage begins Saturday, June 2, at 1 p.m. ET on FS1 and MRN.