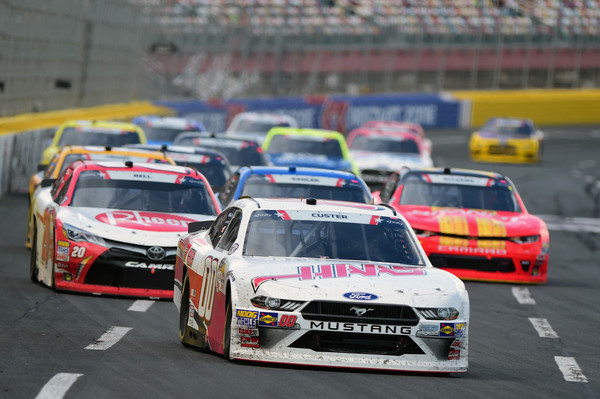 ● Custer held the Haas Automation Ford inside the top-10 during Stage 1.

● He pitted for four tires, fuel and chassis adjustments at the conclusion of the stage to correct tight-handling conditions.

● Custer powered the Haas Automation Ford into the top-five during the restart.

● After a lap-79 caution, he climbed to second place and held the runner-up position before Stage 2 ended.

● Pitted for four tires, fuel and adjustments after Stage 2 concluded. He was first to leave pit road.

● Custer took the lead on lap 102 until a caution five laps later.

● On the restart, he maintained the lead until another caution on lap 126.

● After the final caution, Custer restarted in third place and battled for the lead before securing a runner-up finish.

● Custer’s second-place finish is his best Xfinity Series finish of the season.

● This marks Custer’s eighth top-10 of the season and fourth top-10 at Charlotte.

● It was Custer’s second top-five of the season and second at Charlotte.

● Custer gained one spot in the playoff point standings.

● Thirteen cautions slowed the race for 59 laps with only 22 of the 40 drivers finishing on the lead lap.

● Brad Keselowski led 77 laps to win the Alsco 300 earning his 38th career Xfinity Series victory. It is his second victory of the season and fourth at Charlotte. His margin of victory over second-place Cole Custer .421 seconds.

“What an incredible day. We’ve always been good here, but we just keep getting better. Our Haas Automation Ford Mustang handled great today and I improved my restarts from last year. It’s great to run up here with the Cup guys and compete for a win. This just shows how hard our guys are working back at the shop. Everyone from Roush-Yates and Stewart-Haas Racing are doing a fantastic job putting us in position to win. We just needed a tick more today. ”

The next event on the NASCAR Xfinity Series schedule is the Pocono Green 250 Recycled by J.P. Mascaro & Sons on Saturday, June 2 at Pocono Raceway. The race starts at 1 p.m. EDT with live coverage provided by FOX.