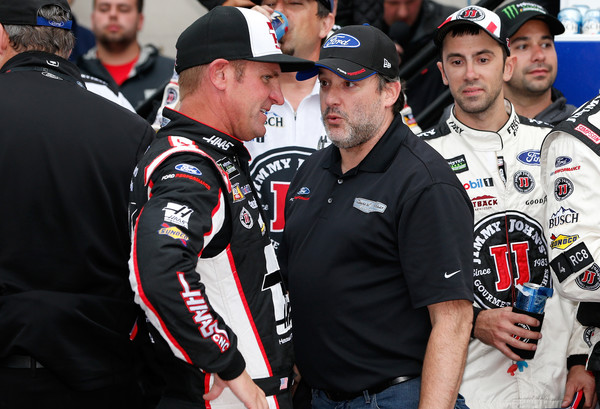 ● Bowyer endured a loose wheel after pitting for a lap-20 caution and restarted at the rear of the field.

● Despite noting loose-handling conditions, he drove his way back into the top-10 before the stage concluded.

● Pitted for four tires, fuel and adjustments at the end of Stage 1.

● Pitted during a lap-153 caution for four tires, fuel and air pressure adjustments.

● Bowyer kept the Haas Automation Demo Days Ford inside the top-10 during Stage 2.

● He pitted for four tires, fuel and adjustments to correct loose-handling conditions after the stage ended.

● He gained the lead on lap 297 and held it until the red flag waved for inclement weather on lap 316.

● Bowyer maintained the lead until lap 337, when he was passed by teammate Kevin Harvick.

● He drove the Haas Automation Demo Days Ford in second place for the remainder of the race.

● Bowyer finished second in the AAA 400 Drive for Autism to secure the fourth 1-2 finish in SHR history. Its last 1-2 finish came on June 25, 2017, at Sonoma (Calif.) Raceway when Harvick beat Bowyer.

● This marks the first time SHR has had three cars finish among the top-five.

● Bowyer led three times for 40 laps to increase his total at Dover to 82.

● Harvick won the AAA 400 Drive for Autism marked the 48th overall win for Stewart-Haas Racing (SHR). It was the organization’s 44th points-paying Monster Energy NASCAR Cup Series win and its third at Dover.

● This was SHR’s eighth Cup Series victory with Ford. The team won its first race with Ford when Busch captured the 2017 Daytona 500.

“Kevin was up front and was the car to beat most of the day. It was our first shot at tires and taking off in clean air. It makes a big difference. When you’re back in dirty air in traffic like we were most of the day it’s tough. Hats off to everyone at Stewart-Haas Racing. These Ford Fusions are fun to drive. The Haas Automation Demo Day was fun to drive. We won with this paint scheme in Martinsville and thought we were going to win with it again today. With Mobil 1 under the hood of mine and the No. 4 car, it’s hard to beat. If we keep knocking on the door like today, we’ll get another win.”

The next event on the Monster Energy NASCAR Cup Series schedule is the KC Masterpiece 400 on Saturday, May 12 at Kansas Speedway in Kansas City. The race starts at 8 p.m. EDT with live coverage provided by FS1 beginning with a prerace show at 7 p.m.