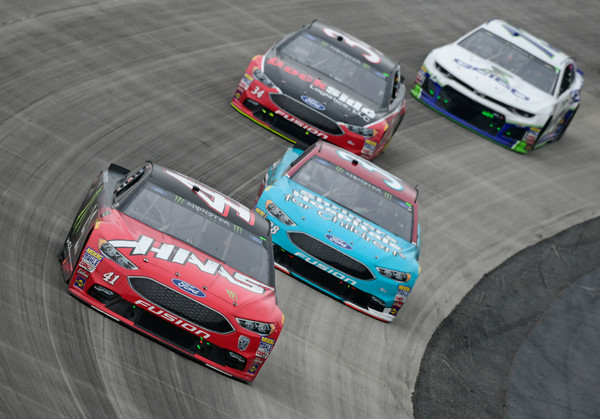 ● The No. 41 Haas Automation/Monster Energy Ford Fusion was a little loose early on.

● Busch pitted for four tires and fuel under caution on lap 23.

● The No. 41 Haas Automation/Monster Energy Ford Fusion pitted on lap 122 for four tires and fuel, but an uncontrolled tire forced Busch to the rear of the field.

● On lap 154 Busch pitted for four tires and fuel and a tire pressure adjustment.

● Busch pitted on lap 243 for four tires, fuel and a tire pressure adjustment.

● On lap 272, under caution, Busch pitted for four tires and fuel.

● Busch worked his way into the top-five late and finished an impressive fifth.

● Clint Bowyer finished second in the AAA 400 Drive for Autism to secure the fourth 1-2 finish in SHR history. Its last 1-2 finish came on June 25, 2017, at Sonoma (Calif.) Raceway when Harvick beat Bowyer.

● This marks the first time SHR has had three cars finish among the top-five.

“It’s all about the team effort. Good day for us. The way that the pit stops went we had to come back from a penalty. Restarts went fair the early part of the race and went good in the latter part. Those restarts are close quarters, and you need to grab spots then. These cars are really aero-sensitive. Thanks to Haas Automation, Monster Energy and Ford we had a top-five day.”

The next event on the Monster Energy NASCAR Cup Series schedule is the KC Masterpiece 400 on Saturday, May 12 at Kansas Speedway in Kansas City. The race starts at 8 p.m. EDT with live coverage provided by FS1 beginning with a prerace show at 7 p.m.