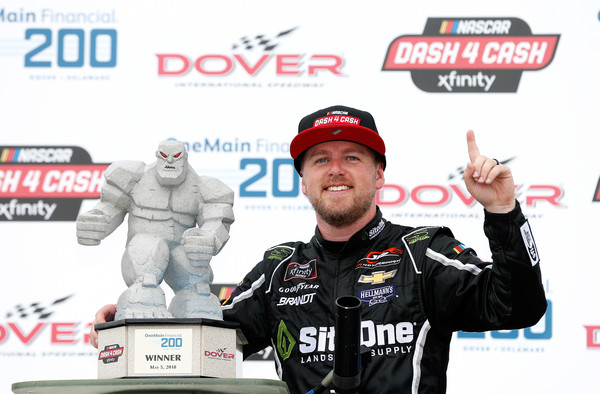 Justin Allgaier had more than one reason to celebrate at Dover International Speedway’s Sunoco Victory Lane on Saturday.

Not only did the driver of the JR Motorsports No. 7 Chevrolet clinch a $100,000 bonus through the NASCAR Xfinity Series Dash 4 Cash program, but Allgaier also was able to hold off teammate Elliott Sadler to win the “OneMain Financial 200” at Dover International Speedway.

“I knew Dover was going to be a good race track for us,” Allgaier said. “I’ve wanted a Monster [Trophy] for as long as I can remember.”

Allgaier led a race-high 104 laps, but it was the final one that was the most heart-stopping, as Sadler edged ahead in Turn 3 for a few moments before the two cars touched exiting Turn 4.

“I was about 90 percent sure I wasn’t going to win entering Turn 3,” Allgaier said. “I thought for sure I was going around. My only instinct was to keep the throttle down. Luckily, we came off the wall and were able to get across the line. It was a pretty crazy way to end the race.”

For Kelley Earnhardt Miller, the co-owner of JR Motorsports along with her brother Dale Earnhardt Jr., the showdown was a bit nerve-wracking.

“It’s part of the craziness of owning two cars when they are in that situation,” Miller said. “It’s awesome to see this team in Victory Lane and relish what they accomplish.”

Allgaier edged Sadler by 0.306 seconds, the closest finish for a NASCAR Xfinity Series race at the Monster Mile since 2009. Daniel Hemric was third, followed by rookies Christopher Bell and Tyler Reddick.

“I could see Elliott in my mirror and saw that he could make a charge,” said Allgaier, who led the race’s final 68 laps. “He raced me so clean all day. We both wanted to win. To battle it out with a teammate is really special. To be able to hold him off is a big deal.”

The “OneMain Financial 200” was the final Dash 4 Cash race of the 2018 NASCAR Xfinity Series season.