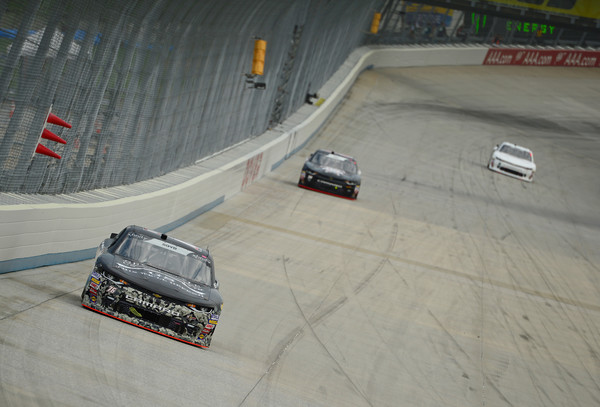 The NASCAR Xfinity Series concluded their “Dash For Cash Series” at Dover International Speedway today. With $100,000 on the line and a very difficult one – mile track, the action was sure to be intense.

After a season best qualifying effort, Boyd was set to roll off from the 27th position; however, due to a late unapproved adjustment, he was forced to start from the rear of the field. It only took 2 laps for the first caution of the day as the 2 of Matt Tifft went spinning.  Caution would again fly for the 45 car of Josh Bilicki getting into the wall on lap 31. Boyd radioed to crew chief Jason Miller that he was “plowing tight” in the center of the corner. Elliott Sadler won the first stage, as Boyd continued searching for a comfortable balance for his Grunt Style Chevrolet.

Boyd came in for four tires, fuel, and a track bar adjustment to help loosen the car in the center of the corner. With about 85 laps remaining, Miller told Boyd he was running his fastest laps of the day. With 70 laps to go, Boyd radioed he believed he was blowing up. The crew quickly pushed the car behind the wall to find one of the wires to the alternator was fried, which ultimately killed the battery. After a quick diagnosis and plan put into action, the team had Boyd back on the track. Justin Allgaier would take the checkered flag, while Boyd managed to battle his way back to finish in the 30thposition.

After the race Boyd reflected, “This place is definitely one of the toughest places I’ve been to yet. We really fought the handling of the car all weekend and I was doing everything I could to figure this place out. I feel like we got the car the best it had been all weekend during the final stage, but then we had that freak battery deal. I can’t say enough about my guys though. No matter what kind of adversity we face, they never give up. Even though the finish doesn’t reflect our effort, I’m extremely proud of what we accomplished as a team today.”

Boyd will take the next few days to rest up in Charlotte before heading out to Pennsylvania Tuesday for the Xfinity takeover in Philadelphia. The Xfinity Series will be off for the next two weekends and will return to action Memorial Day Weekend in Charlotte.
Spencer Boyd Racing PR/Photo Robert Laberge/Getty Images