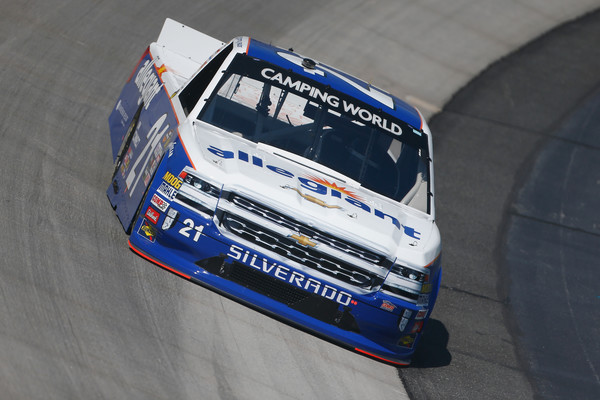 Johnny Sauter marked his 40th birthday earlier this month and celebrated in style at Dover International Speedway on Friday with a victory in the “JEGS 200” NASCAR Camping World Truck Series race.

Sauter is only the second driver to win multiple NASCAR Camping World Truck Series races at Dover (Kyle Busch has four wins) and is the first to have back-to-back wins since Busch accomplished the feat in 2013-14.

“I couldn’t be more proud to win this race the way we did,” Sauter said. “When you tame this place, you’ve really done something.”

The overtime laps followed one of the most thrilling duels of this NASCAR season between Sauter and pole-winner Noah Gragson, who grabbed the lead following a restart on lap 188 and held off several Sauter charges.

Gragson blocked one Sauter attempt exiting Turn 2, causing Sauter to scrape the wall. Several laps later, Sauter tried again on the outside. With Sauter’s truck partially clear, Gragson made contact with Sauter entering Turn 3, causing the 19-year-old to spin out.

“We were going wreckers or checkers,” said Gragson, who finished 20th and led 60 laps. “Today, we were wreckers.”

Sauter praised Gragson for visiting him in Victory Lane and predicted he would have more battles with the young driver in the future.

“He’s obviously going to be a guy we will race against for the championship,” Sauter said. “You’ve got to get to the finish of these races.”

The crash on Lap 199 led to a long caution period before the green-white-checkered finale. On the final restart, Sauter pulled away from Matt Crafton to notch his 19th career NASCAR Camping World Truck Series victory.

“It’s not every day you get a truck like that,” said Sauter, who led 137 laps in the GMS Racing No. 21 Chevrolet. “When you have a truck as fast as ours, you have to find a way to win the race.”

Crafton finished second, more than half a second behind Sauter. Justin Haley was third, followed by David Gilliland and 17-year-old Harrison Burton. Gilliland’s 17-year-old son Todd was 10th, one lap down.

“Noah and Johnny were putting on a good show,” Crafton said. “We just didn’t have any short-run speed. I tried everything I could [at the end]. All in all, not a bad day.”

“This is such a cool place to race at,” Sauter said. “I turned 40 this week. I just want everyone to know how much I appreciate it.”