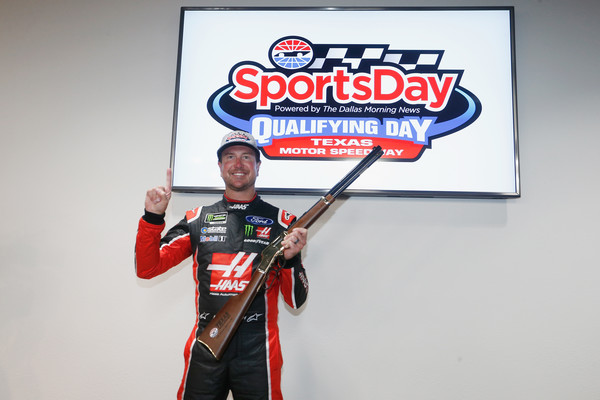 Kurt Busch was fastest in practice and fastest in Round 1 of knockout qualifying Friday at Texas Motor Speedway, and that was enough to secure pole position for the O’Reilly Auto Parts 500.
The threat of lightning around TMS prompted NASCAR officials to cancel Rounds 2 and 3 of time trials, handing P1 to Busch – the Monster Energy NASCAR Cup Series track record-holder.
Busch topped a list of 37 entries with a Round 1 hot lap around TMS’ 1.5-mile oval in 27.360-seconds/197.368 mph. Busch, driver of the No. 41 Haas Automation/Monster Energy Ford Fusion, began Friday’s Cup activity by pacing the opening practice at 27.523-seconds/196.200 mph after just seven laps.
As was the case during that practice, Busch led a sweep of the top three spots for Stewart-Haas Racing after 15 minutes of time trials. Kevin Harvick, a three-time race-winner this season, will start second in the No. 4 Busch Light Ford after turning a lap in 27.395-seconds/197.116 mph. And Clint Bowyer, winner of the most recent race at Martinsville Speedway, will grid third in the No. 14 Mobil 1/Rush Truck Centers Fusion after lapping in 27.435-second/196.829 mph.
Busch, Harvick and Bowyer gave the team co-owned by industrialist Gene Haas and retired three-time Cup champion Tony Stewart its first 1-2-3 start in Cup. And Busch said his team had spent practically zero time checking out The Weather Channel for the Dallas-Fort Worth forecast.
“The thought that weather was in the area hadn’t crossed our minds, but you’ve got to play all three rounds as smart as you can,” said Busch, who is paired with crew chief Billy Scott. “We went aggressive and it paid off. Round 3, we would have had to make a big gamble to maintain that pace. Doug Yates and the guys in the engine department … those guys are building some good steam. When you step on the gas it’s a great feeling to know it’s going to stick.”
Busch, now a three-time Cup pole-winner here, set the series track qualifying record at 26.877-seconds/200.915 during time trials for last November’s AAA Texas 500 Playoff race.
“I thought we were pretty strong in practice and you have to make the right adjustments as the Xfinity cars practice and it got warmer,” said Busch, who recorded his 23rd Busch Pole Award in 619 series races. “I’m gaining more and more confidence in Billy Scott and our lead engineer in finding that tenth of a second we need. We need to close the races out stronger, that’s the next step.”
Busch’s first pole of 2018 also is his fourth top-10 start. Meanwhile, Harvick’s three consecutive victories and Bowyer’s popular drought-buster have labeled SHR as Cup’s team-to-beat.
“It’s hard to pinpoint one single reason (for the resurgence), but my ex-crew chief, Tony Gibson – for him to come off the road and be as involved as he is in building the cars for all four teams – calling the races, pushing cars through tech – I think he found his perfect role at SHR. He’ll say it’s about ‘the process’ but he has found some good people, rearranged them in different positions and created continuity between the four cars.”
Harvick, winner of the AAA Texas last November, posted his seventh top-10 start of 2018 and 10th in 31 races at TMS. Bowyer now has nine top-10 starts in Fort Worth and four in seven races this season.
Joining Bowyer in Row 2 is Team Penske’s Ryan Blaney after lapping at 27.467-seconds/196.600 mph in the No. 12 Menards/Richmond the Water Heater Experts Ford.
Row 3 is led by Denny Hamlin, who qualified the No. 11 FedEx Office Toyota Camry fielded by Joe Gibbs Racing at 196.257 mph. He will start alongside reigning Cup champion Martin Truex Jr. at 195.979 mph in the No. 78 Bass Pro Shops/5-hour ENERGY Toyota fielded by Furniture Row Racing.
Rounding out the top-10 are Joey Logano at 195.922 mph in the No. 22 Shell Pennzoil Ford fielded by Team Penske; series point-leader Kyle Busch at 195.773 mph in the No. 18 Interstate Batteries Toyota fielded by JGR; seven-time Cup champion/defending event-winner Jimmie Johnson at 195.603 mph in the No. 48 Lowe’s for Pros Chevrolet Camaro ZL1 fielded by Hendrick Motorsports and Kyle Larson at 195.030 mph in the No. 42 Credit One Bank Camaro fielded by Chip Ganassi Racing.
Johnson was hoping for rain, which eventually began falling after the session was cancelled. “I’m in the top-10, let it rain,” Johnson said. “Call a spade a spade, I was just telling (teammate) Alex (Bowman) we started off and struggled pretty bad.  I think the track was just really far off from what we anticipated.  At the very end of practice, things started going much better for us and popped off a decent lap there and making good gains. We’re excited either way.”
Daniel Suarez, NASCAR’s first fulltime Mexican driver, will start 14th after lapping at 194.812 mph in the No. 19 STANLEY “Racing for a Miracle” Toyota fielded by JGR.
Darrell “Bubba” Wallace Jr. (15th) was the fastest qualifying rookie at 194.763 mph in the No. 43 Click ‘n Close Camaro fielded by Richard Petty Motorsports.
Cup teams are scheduled for 55 minutes of practice Saturday at 10 a.m., with a final 50-minute Happy Hour session set for 12:30 p.m.

Bubba Wallace 22nd Under The Lights at Bristol

Alex Bowman Finished 16th at Bristol; Seeded 7th In The Round of 12 Heading To Vegas

Ryan Preece Gets a Top Ten In Bristol