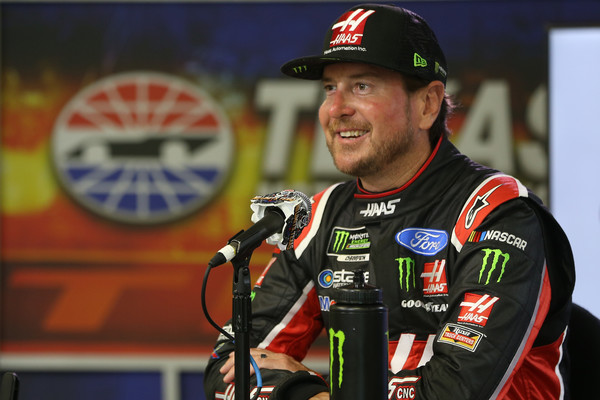 TALK ABOUT YOUR QUALIFYING EFFORT: “It was good. We had a good lap and just got beat by a little bit. I think we didn’t really realize that was going to be the last one but we thought maybe there was a chance. We kept it in the family and that is a good thing for Stewart-Haas Racing and hopefully we can continue the trend of running well for the rest of the weekend.”

DID YOU TRY THE TOP GROOVE AT ALL IN PRACTICE? “No. The bottom groove is going to be the fastest. Until they have a race there won’t be anybody off the bottom because it is still dirty, even with all the work that they have done, everyone is still running on the bottom so the debris, not as treacherous as it would have been if they didn’t run everything in, but still there. They are doing everything they can but in the end you just have so much grip in the whole race track that the bottom is going to be the dominant groove until there is less grip.”

DEREK CARR CALLED INTO HAPPY HOURS A COUPLE WEEKS AGO AND TALKED ABOUT BEING A FAN OF NASCAR AND EXPRESSED INTEREST IN COMING TO A RACE. HAVE YOU WORKED ANYTHING OUT? “We need to carry that conversation out. We just went on vacation and kind of shut the world off. I am glad you reminded me. We need to try to fulfill that conversation to get him to a race. He is a good guy. I don’t know if any of you follow him on Twitter. He is fun to follow because he is such an inspirational person and the things he says make a lot of sense in life in general. It would be good to have him out.”

CHASE BRISCOE WILL MAKE HIS STEWART-HAAS RACING DEBUT NEXT WEEK IN THE XFINITY SERIES. HOW DO YOU THINK HE WILL DO? “I think Chase will do well. Our stuff has been running well and I think it is going to be good for him to get in one of those cars to have a better feel as to what they should feel like. I know they are still trying to get everything back to where it needs to be with the 60 and I think him getting in our car is definitely going to give him a good indication on where he is at and get him his first good look at having something that is capable of running in the top-five.”

TALK ABOUT YOUR TRIP TO AUGUSTA: “We were talking about the trip this morning. Everything around here about trying to figure out who’s better on social media and connect on social media. And (there) they take your phone away. You can’t get on the property with your phone and nobody’s worried about taking pictures. Everybody is engaged in the event and it’s sold out every day. That’s intriguing just because of the fact of how everybody is else thinking in every other sport. It’s one of those niche situations. It’s outside of reality. It’s refreshing. You don’t even think about it because you don’t have it and that being your phone.”

WITH ALL THE BUZZ THAT TIGER WOODS THIS WEEK. DO WE NEED SOMEONE TO MOVE THE NEEDLE LIKE TIGER WOODS? “The fact of the matter is that I’m never going to be Dale Earnhardt Jr. or Chase Elliott. You’re not going to have that connection the hardcore roots with the fans. Tony (Stewart) was popular but he was never going to be an Earnhardt. As you look at it right now, Chase has that potential. I’m fortunate to have a solid fan base. It seems like we keep gaining momentum from a fan side of things and hopefully that continues. The guy that has the most potential is Chase Elliott with the traditional NASCAR fans. It’s just like when (we) talk; you have to win. There’s a difference between a superstar and an megastar. In the past, a superstar wasn’t a megastar because of the fact that he didn’t win enough. Chase Elliott is the next guy that can be a megastar but you have to win.

“When you have a guy like Tiger Woods, he’s won and won and won and won and won and won. Danica (Patrick) had a personality. She didn’t perform well. She could have been a megastar as well. Danica didn’t perform well. In the end, performance trumped superstar to megastar. And if you want to be a megastar you have to perform and win. That’s the effect that a guy like Tiger Woods has. It’s something that when you look at a guy like Jimmie Johnson…and Jimmie and I have had this conversation….we don’t have that capability from that traditional, roots family standpoint that you can be that guy. There’s only a few people that come through the sport that can be that guy. Jeff Gordon came through, but he won a lot in the beginning. He was that young guy that kept winning and won championships and had that immediate impact as far as catching everyone’s attention. After you get in here for a few years and don’t catch everyone’s attention you just kind of wind up being one of the guys unless you end up winning a lot.”

WHAT’S IT GOING TO TAKE TO GET THE SPORT BACK TO WHERE IT WAS FIVE YEARS AGO? “Yeah. I think you need to backup more than five years. I think when you look at the dynamic between Jeff Gordon and Dale Earnhardt, that’s the dynamic that we have the potential to have right now with the group of young racers that have come in. But somebody has to step up and be that winner. Who’s the young winner? Who’s going to be the guy that’s going to go against Truex and challenge him for the championship that he’s defending and win races? I’m happy with where I’m at. We’re winning races and gaining momentum and doing all the things we need to do. If we keep winning you’ll keep gaining that same momentum with the fans and hopefully we can keep doing that. At some point, a lot of marketing has gone around a group of guys and the guys that are winning…you can market over here and have the winners over here…until you have somebody consistently step up and win races in that group…and Kyle Larson has done that. It’s just and interesting conversation that you can debate a lot of things for a long time. I love to talk about it because it’s very interesting. We all need each other to play off of everything that’s going. It seems like it’s the same group of guys the last two years.

CAN YOU TAKE US THROUGH YOUR POLE WINNING LAP? “It was a unique situation with just having the one round. The thought that weather was in the area hadn’t crossed our minds but yet you have to play all three rounds as smart as you can. We went a little bit aggressive on that first round and it paid off. I think Round 2 would have picked up even more speed and Round 3 would have been where we had to make a big gamble to see if we could still maintain that pace. I am glad we had that speed right off the truck thanks to Billy Scott and Doug Yates and the engine department. Having that technical alliance with Mobil 1, those guys have helped us with the qualifying side of it. It is neat to have our Fords at Stewart-Haas hauling the mail like this. When you attack the track and stand on the gas hard it is a great feeling to know it is going to stick. Stewart-Haas Racing has been on fire recently.”

HOW CONFIDENT WERE YOU THAT YOU COULD SIT ON THE POLE TODAY? “I thought we were pretty strong in practice and then you have to make the right adjustments as the Xfinity cars practice and then with the temperatures being a little warmer this time around. The track was going through more changes here now than it did last fall. I am gaining more and more confidence in Billy Scott and our lead engineer on the way they are pinpointed on finding that tenth of a second that the car needs. We have done that in practice and qualifying and now need to translate that into the race. Mainly the second half. We have done good in the first and second stages but we need to close the races out stronger. That is our next step.”

YOU MENTIONED SHR BEING ON FIRE LATELY. THERE ARE A LOT OF THEORIES AS TO WHY. WHAT WOULD YOU POINT TO AS THE BIGGEST REASON FOR THE SUCCESS SO FAR IN 2018 AS AN ORGANIZATION? “I think it is hard to pinpoint one single reason but for my ex crew chief, Tony Gibson, to come off the road and be as involved as he is in the process of building all the cars for all four teams and have somebody as current as he was on the pit box calling races and pushing cars through tech, building cars aero wise and chassis wise, to have him oversee the four cars — I am a bit biased because I love Tony Gibson and he has done a tremendous amount for my career — I think he has found his perfect role at Stewart-Haas Racing. If you go ask him now he will say it is all about the people and process around him but he has found some good people, rearranged them into different positions and I think that our team is doing a really good job of creating continuity between the four cars. When you have that at the shop with the ways the cars are built from the first day, it just seems to translate into more success and an easier transparent flow all the way through when you put a car on the race track and sit like today with the top-three positions here in qualifying. It seems to flow even better.”

WITH TEMPS IN THE 40’S TOMORROW AND RACE TEMPS IN THE 60’S, DO YOU LEARN ANYTHING TOMORROW? “It is one of those days you want to call in sick. There isn’t much you can gain tomorrow morning at 9 am in 40-degrees. You have to go off past race notes. We will go out there for practice runs. I know the engine guys want to tune up some things. That is a lot of the credit too, back to Nate Ryan’s question. There is no single reason or one single person but to have Doug Yates and the Roush Yates engines under the hoods, that plays in qualifying and I want to thank that whole group for giving us the horsepower to get the pole today and the race wins this year on big tracks, little tracks, superspeedways – Doug Yates and his group has been under the hood the whole way.”

Even Off Track, Matt DiBenedetto is a Mustang Man