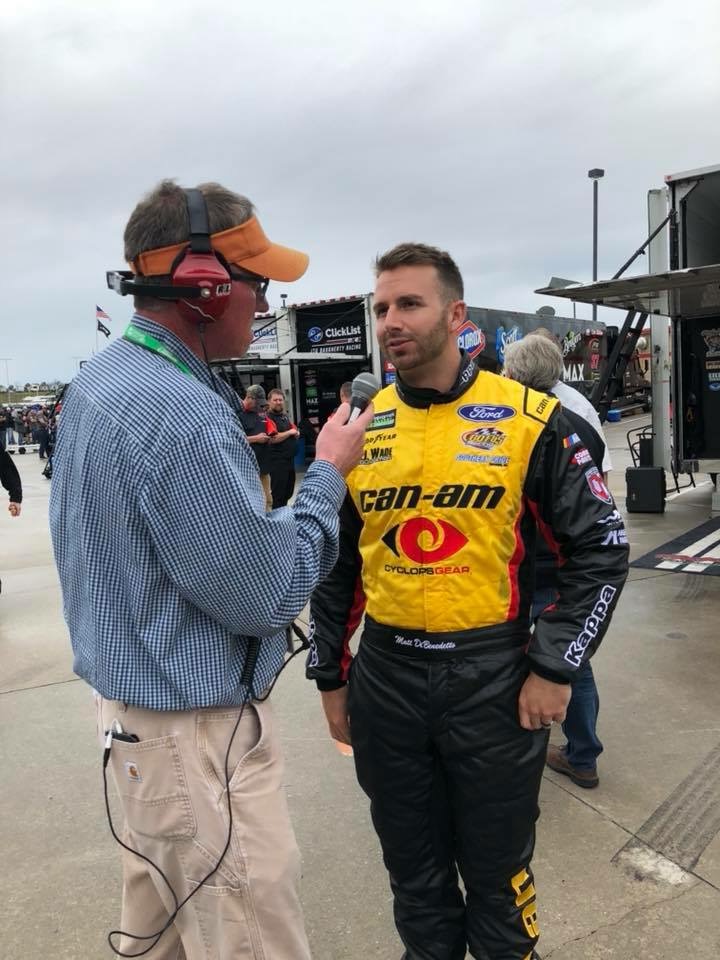 When Matt DiBenedetto put out a video on Twitter and Facebook Tuesday morning, he never could’ve imagined the response he got. DiBenedetto went to social media asking for networking help, hoping to get introduced to the right person who might be able to put a deal together for a sponsor for his No.32 Ford for this weekend. What he instead found was an outpouring of support from his NASCAR family when Denny Hamlin graciously offered $5,000 out of his own pocket and retweeted the post to his followers.
Hamlin’s support was quickly followed by Kevin Harvick who asked to run KHI Management on the Go Fas Racing Ford and Darrell Waltrip who offered to put the Waltrip Brothers Golf Charity Championship as a sponsor as well. Not only were the offers worth a lot to the team financially, but their support led to finding primary, secondary, and associate sponsorship for DiBenedetto as well.
Zynga Poker will be represented as the primary sponsor for the No.32 team this weekend, a company that found DiBenedetto’s story through the social media campaign that caught the attention of the NASCAR community over this past week. Enlisted Nine Fight Company also saw the video DiBenedetto posted and quickly responded to the team showing their support, and joined the team as a secondary sponsor at Phoenix. Late Tuesday night, Pit Stops for Hope joined the team as an associate sponsor, completing what was already a crazy day for the No.32 team.
DiBenedetto Joins MRN Broadcast:
“The Voice of NASCAR” – welcomes Monster Energy NASCAR Cup Series driver Matt DiBenedetto to the booth as guest analyst of Saturday’s NASCAR Xfinity Series DC Solar 200 at ISM Raceway in Phoenix, Arizona. This will be the first time that DiBenedetto will be a guest radio analyst for a NASCAR event. With all of the events that have occurred this week, DiBenedetto will have plenty to talk about outside of the racing action.
“I think the fans are going to love the insight Matt is going to bring our broadcast on Saturday,” said Chris Schwartz, vice president ISC/MRN. “He has a large fan following, especially on Reddit, because of his genuine personality and clever wit. It’s going to be fun listening in.”
Last Week for the No.32 Team:
Randy Cox debuted last weekend as the new Crew Chief for Matt DiBenedetto and the Go Fas Racing team in Las Vegas. DiBenedetto qualified 32nd in his first race with Cox, and found that his Can-Am/Wholey’s Ford had an extremely strong long-run pace. Picking cars off one-by-one, DiBenedetto moved into the top-25 and, with the help of several quick pit-stops, finished 22nd, the team’s best finish so far in 2018. The finish also earned DiBenedetto the “Mobil 1 Performance Award”, by gaining 95 positions to become a NASCAR Ultimate Performer.
DiBenedetto on ISM Raceway:
“ISM Raceway is definitely one of my favorite racetracks that we go to. We’ve always had strong race cars there in the past, and I think we’ll have another great one with Randy this weekend. The guys have bObviously we had such a crazy week with everything that happened. The outpouring of support we got from the NASCAR community, and beyond, was beyond words. I don’t really know how I can ever thank these folks enough – from all of the drivers and teams who offered to help, to Zynga Poker, Enlisted Nine, and Pit Stops for Hope all stepped up to give us a fully sponsored racecar for Phoenix. I can’t wait to get this car on track!”
Chassis Info: Crew Chief Randy Cox will be bringing chassis GFR-955 to serve as the primary car this weekend.
Go Fas Racing PR/Photo Credit Suzanne Disspain/Speedway digest/The Pit-Stop Radio