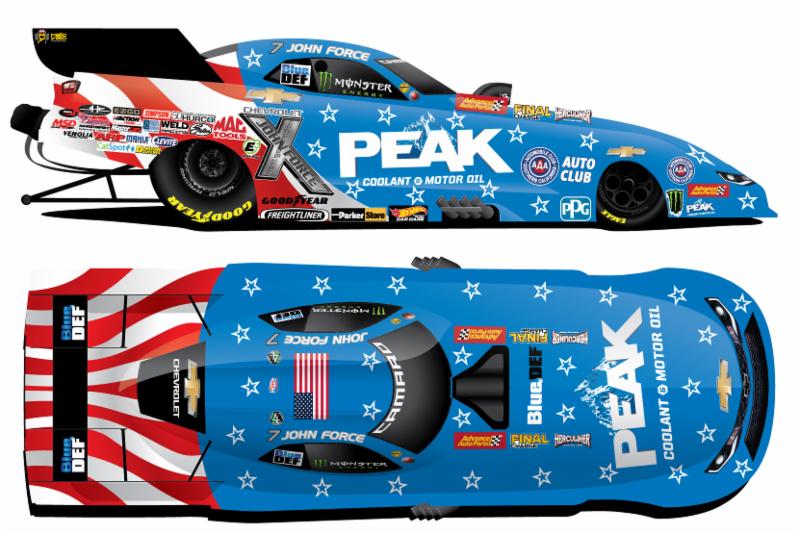 Seven-time and defending Gatornationals winner John Force will race a fan designed PEAK Antifreeze and Coolant Chevrolet Camaro SS at the upcoming NHRA Gatornationals March 16-18. PEAK reached out to fans across the nation for creative designs. William Codianni, 22 from San Diego, was selected from a group of finalist to have his “American Made” themed design adorn Force’s hot rod.
“There are no bigger American classics than the Chevrolet Camaro and John Force,” said Codianni. “I have so much pride in having my design a part of John Force and his Camaro Funny Car. What they both stand for as far as respect of the country and what the flag stands for is amazing.”
“I got an email about a week after the deadline and I thought there was no way I could win. It was in the morning and I was rubbing the sleep out of my eyes but I called the number and I couldn’t believe it when they said I had won,” added Codianni.
When Codianni is not supporting John Force Racing, PEAK and the NHRA he is attending races at Auto Club Raceway at Pomona as well as designing cars for his friends for racing themed video games.
“I have been to Pomona about 20 times and it is the only track where I have seen an NHRA national event. I can’t wait to see the track in Gainesville and I know it will be an amazing experience,” summed up Codianni.
Codianni will be taking his father with him to the Gatornationals as a thank you for taking him to his first NHRA national event in 2000.
JFR PR