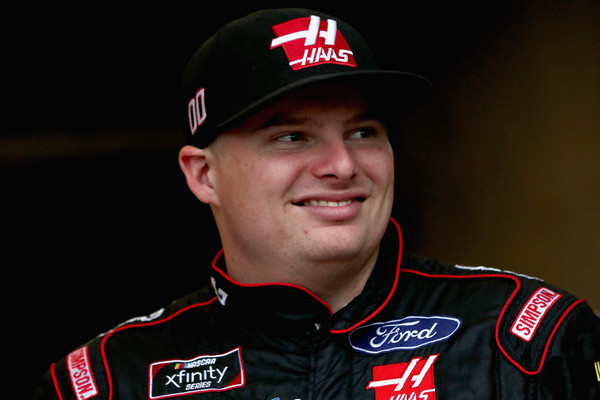 ● When the green flag waved Custer was inside the top-five, but he got caught outside of the pack and fell to eighth place.

● He pitted under green-flag conditions on lap eight for two tires, fuel and chassis adjustments.

● While he was exiting pit road, the caution was brought out. Custer was ahead of the leader when the caution came out, therefore staying on the lead lap.

● During the caution period, most of the field decided to pit in front of Custer, promoting the No. 00 Haas Automation Ford Mustang to second place.

● Custer ran in third place until a multicar accident erupted just one car length behind him. He opted not to pit during the caution period.

● He restarted the one-lap shootout on the front row and raced the No. 7 car for the lead until a four-wide finish put Custer in third.

● The Haas Automation Ford driver raced inside the top-10 for the majority of Stage 2.

● On lap 50 Custer radioed there was a vibration in his right-front tire, but crew chief Jeff Meendering said multiple cars were having similar issues.

● Several cars pitted under green while Custer stayed out, advancing the No. 00 Ford Mustang to fourth place.

● When the stage concluded, Custer pitted for four tires, fuel and adjustments.

● Custer battled just outside the top-five until he attempted to make a block and was clipped on the left-rear quarter panel, sending him into the wall and ending his day.

● The Lilly Diabetes 250 was originally scheduled for Saturday, Sept. 8 and was postponed to Monday due to inclement weather.

● NASCAR Xfinity Series practice and qualifying was also cancelled due to inclement weather. The field was set by owner points.

● Justin Allgaier won the Lilly Diabetes 250 to score his 10th career Xfinity Series victory, fifth of the season and first at Indianapolis. His margin of victory over second-place Tyler Reddick was .092 of a second.

“It’s hectic out there – especially restarts. You’re trying to make blocks and get runs and trying to be as aggressive as you can, and things just happen. I thought our Haas Automation Mustang was pretty fast, we just couldn’t get many people to work with us. It seemed like we just got hung out to dry a lot, but I just made a mistake there trying to make a block. We’ll go to Vegas and try to win one.”

The next event on the NASCAR Xfinity Series schedule is the DC Solar 300 on Saturday, Sept. 15 at Las Vegas (Nev.) Motor Speedway. The race starts at 5 p.m. EDT with live coverage provided by NBCSN.