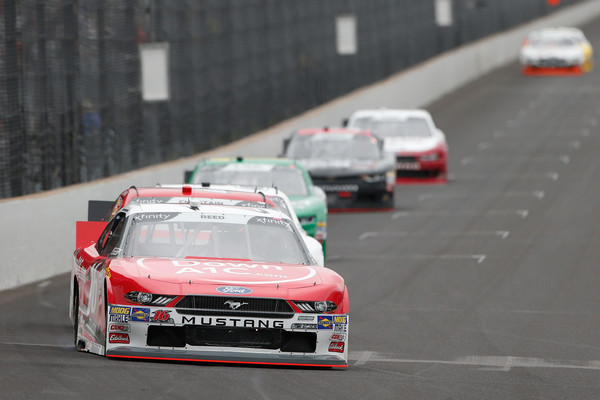 Ryan Reed drove his No. 16 Drive Down A1C Lilly Diabetes Ford to an 11th-place finish Monday at Indianapolis Motor Speedway in the rain- postponed Lilly Diabetes 250.  NASCAR had to move the Xfinity Series race to Monday morning after lingering rains cancelled all pre-race on-track activity.

Reed took the green flag 15th and was making up ground on track, before his momentum was cut short when he received right-side damage while avoiding an incident in front of him.  The contact damaged the crush panel and at speed the panel pushed in on the tire, causing a flat tire under green.  Despite the setback, Reed rebounded with the help of his crew to earn a lead-lap 11th-place finish.

“We just never had the track position we needed and I got caught up in someone else’s mess early on and had right-rear damage,” said Reed.  “Then we had a right-rear tire go down under green that really cost us and put us behind and we really just worked our way back from that all day.  I’m really proud of everyone for battling back from one lap down.  We got back on the lead lap and ended up with an 11th-place finish, which wasn’t too bad all things considered.”

Remnants of a tropical storm lingered in the Indianapolis area, forcing the cancellation of all on-track activity and forcing a NASCAR double header Monday with the Xfinity and Cup Series.  Despite having no practice, Reed started 15th and steadily made up ground on the track.  Reed received some contact avoiding an incident in stage one.  The contact hurt the right side crush panels.

The team thought they had made the necessary repairs, but Reed had to bring his No. 16 Drive Down A1C Lilly Diabetes Ford down pit road under green after a fender rub led to a flat tire.  Reed lost one lap in the process, but had an intact Ford ready to tackle the remaining laps.

Reed was the “lucky dog” recipient in the final stage and once back on the lead lap he worked his way through the field.  Reed worked his way up to 11th and maintained his ground as the laps wound down to ultimately cross the finish line 11th.