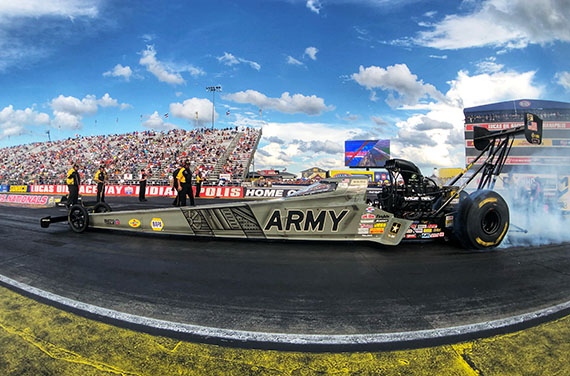 Schumacher, the winningest driver in Indy history with 10 triumphs, will pilot the U.S. Army Dragster for Don Schumacher Racing (DSR) Monday in his opening-round matchup with a bit of uncertainly after failing to make a complete qualifying run in four attempts Saturday and Sunday. The eight-time Top Fuel world champion earned his position in the field Friday night with his run of 3.801 seconds at 328.14 mph. After losing traction in both sessions Saturday, “The Sarge” opened the Sunday by making it just past half-track when his machine was shutoff for mechanical reasons resulting in a lap of 4.671 seconds at 167.76 mph. He came back in the final session and hazed the tires early posting a lap of 4.849 seconds at 150.45 mph.

“I think (crew chief) Mike (Neff) said it best,” said Schumacher. “He said he’s won more times here when he has screwed up on all qualifying runs and made some big changes for Monday. Right now, we don’t have a very good race car, but we have an incredible team. We know how to fix stuff. We tested here awesome, so we’ll go back tonight and make some adjustments for tomorrow. It’s all about confidence here. I am surrounded by an amazing group of people and this Army team has proven over the last 18 years that we are at our best when we are in absolutely must step up situations. We have a great opportunity to do something tomorrow that no one else has ever done. We’re going after our 11th U.S. Nationals, and want to win it for the Army in our last Indy together.”

He will begin his run to history by facing Billy Torrence, who is coming off his first career Top Fuel win two weeks ago in Brainerd, in Monday’s first-round matchup. The two have met five times before with Torrence winning three times. Their most recent race was the Chicago first round with Torrence scoring the victory. This will be their first race against each other in the U.S. Nationals.

Brown enters Monday as the highest qualified driver from the Army Racing contingent. The 2011 U.S. Nationals Top Fuel champion begins his quest for a fourth career Indy win, he won Indy in Pro Stock Motorcycles back in 2000 and 2004, after also not making complete runs on Sunday. The three-time Top Fuel world champion grabbed the third position Friday night with his monster run aboard the Matco Tools/U.S. Army/Toyota for DSR of 3.772 seconds at 325.22 mph. Following a good pass Saturday in the heat, Brown was hoping to have better success Sunday, but smoked the tires in both runs posting laps of 6.303 seconds at 109.70 mph in qualifying session four and 6.620 seconds at 104.96 in session five.

“We’re trying to get ready right now,” said Brown. “Tomorrow’s going to be a different day. This track has been tricky for us all weekend and we’ve just got to find our spot right now. We thought we had enough runs to get it done, but we’ll start tomorrow from a good qualifying spot. We’ve just got to go A to B tomorrow and get it down the race track. I am extremely confident in my Matco Tools/U.S. Army boys. We’re going to put in the work tonight and and do what we do when it counts tomorrow.”

It starts with Brown facing 2017 Top Fuel world champion Brittany Force. The two have never met in Indy but have raced 19 times before. Brown leads with 13 wins, including his hole shot victory in Brainerd in the second round.

Pritchett heads into Monday with momentum after closing out qualifying with her run of 3.859 seconds at 319.29 mph late Sunday afternoon. The driver of the Papa John’s Pizza/U.S. Army Dragster for DSR will race from the sixth position based on her first qualifying run of 3.797 seconds at 323.50 mph. Pritchett will face Doug Kalitta in the opening round Monday. The two most recently met in the Denver final, which was won by Pritchett. Kalitta holds an 11-8 all-time advantage in previous matchups.

“We can’t even think about what a U.S. Nationals win would mean to this team right now,” said Pritchett. “We’ve been so focused on qualifying and trying to get this Mopar hot rod back on track. I can’t give it up enough for this Don Schumacher team with the help from Papa John’s Pizza and the U.S. Army. We’ve been battling some things since Friday night and today we made a decision on the direction to go for eliminations and I feel good about it.  Indy challenges you in so many ways and brings out the best in the drivers, tuners and everyone on these teams and for that I’m looking forward to tomorrow.”

Elimination rounds are set for at 11 a.m. Sunday with the FOX network and FS1 providing live coverage. The broadcast begins on FS1 with two hours of live coverage of eliminations starting at 11 a.m. and continuing on FOX at 1 p.m.