Truex Jr. Out to Prove Recent Michigan Race a Fluke 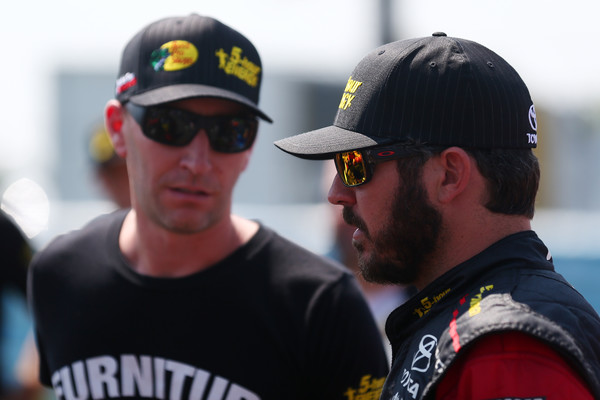 Martin Truex Jr. doesn’t have to make amends. He is the reigning NASCAR Cup Series champion, who continues to be one of the top drivers this season. He is also coming off a stalwart runner-up finish in Sunday’s Watkins Glen International road race.
But when it comes to Sunday’s race at the 2-mile Michigan International Speedway (MIS), Truex and the Denver-based Furniture Row Racing team feel they have something to prove after a subpar performance in the rain-shortened June race at MIS with a qualifying effort of 17th and finishing position of 18th.
“We didn’t win at Michigan last year, but felt we had the best car in both of the races there,” Truex recalled. “We went back there in early summer and we were looking for a win, but things sure turned upside down for us in a hurry.
“We had a mechanical issue which hampered my ability to control the car the way I needed to. So it was kind of a weird weekend. Michigan has been a good track for us and to struggle the way we did was uncharacteristic. I think we have a handle on the problem and look forward to going there and competing like we used to.”
When asked about what it will take to be successful at Michigan, Truex feels there’s no wiggle room when it comes to the car setup.
“The place is so big and fast,” Truex noted. “If you’re off just a little bit, it feels like a lot and you can really struggle. It’s a difficult track that takes a lot to get around there —  horsepower, aerodynamics, setup, you name it. You have to be almost perfect. Hopefully we can go there and have a good run with our 5-hour ENERGY/Bass Pro Shops Toyota.”
Truex dominated the only other 2-mile track on the circuit by winning with a 15-second margin in March at the Fontana, Calif. venue.
The Southern California victory was the first of four wins for Truex this season. He also has four runner-up results and 15 top-five finishes.
“Right now it’s about getting as many playoff bonus points as we can,” Truex said. “The playoffs are right around the corner and it would be nice to have a (points) cushion as we did last year.”
After 22 races Truex ranks third in both driver and playoff points. His average finish of 9.1 is slightly better than his average finish of 9.4 for the 36-race 2017 season.
In 25 career starts at MIS, Truex has claimed six top fives, nine top 10s and 207 laps led. His career average start/finish is: 14.0/15.5.
FRR PR/Photo Credit Sarah Crabill/Getty Images