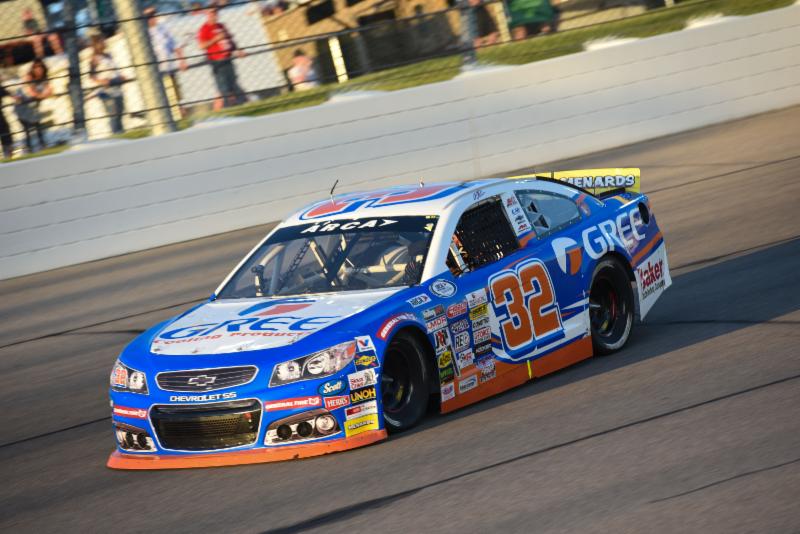 On the strength of a jaw-dropping performance last weekend at Elko (Minn.) Speedway which saw Win-Tron Racing driver Gus Dean (@GusDean) earn his second career ARCA Racing Series presented by Menards victory, the team heads to Berlin (Mich.) Raceway hoping for back-to-back triumphs in Saturday night’s Primera Plastics 200.
Carrying momentum from Elko, Dean will visit the 0.4375-mile paved oval for the first time and hope that his trip to the historic short track located just outside Grand Rapids, Mich. will be one that he won’t soon forget.
“It’s been an awesome week,” said Dean. “Our win at Elko wouldn’t have been possible without the support of GREE, Tradewinds and Baker Distributing and my Win-Tron Racing team.
“The win was my crew chief Jamie Jones’s first victory in ARCA competition and I know that was special for him.”
For the second time this season, the Bluffton, S.C.-native will compete at a track he’s never been too, but that doesn’t bother the sophomore ARCA Racing Series driver.
Last season, Dean blossomed at tracks he had never seen. Capturing five top-five and nine top-10s overall en route to his fourth-place finish in the championship standings, Dean is hoping for more of the same on Saturday night, but with an added twist.
“We want another win or two,” Dean explained. “That would be awesome. It’s going to be tough though. There’s a lot of good cars in the series right now and you’re hunting for every spot. We just need to keep taking chances and see how it all unfolds.”
Berlin Raceway has been dubbed one of the most unique short tracks on the schedule with its flat demeanor and no backstretch wall – the 23-year-old knows it could be a challenge but will lean on team owner Kevin Cywinski for some direction.
“Win-Tron Racing has been to Victory Lane before and I’d like to get them back there,” sounded Dean. “We just have to take this approach the same way we’ve been doing. Just go out there and do the best we can and hope at the end of the race, we’re standing tall and proud.
“Just like last weekend at Elko Speedway. Winning is a great feeling and I sure would like to enjoy it again on Saturday night.”
Team owner Kevin Cywinski says the win at Elko was the boost the GREE Racing team needed – but it’s back to work on Saturday night at Berlin.
“I’m really proud of Jamie, Gus and the guys,” he said. “The win was huge for us. We’ve had fast cars all year and really had nothing to show for it. Now, we have a win and we’re hungry for another one.
“Hopefully we can go to Berlin on Saturday night and contend for another one. We were in Victory Lane there seven years ago with Matt Merrell and it would be nice to visit it again with Gus and the GREE team.”
In 40 career ARCA Racing Series starts, Dean captured his first career victory in his second ever start at Talladega (Ala.) Superspeedway after starting a career-best second in Apr. 2016, while earning his second win at Elko Speedway in July 2018. Overall, Dean has two wins, 11 top-five and 23 top-10 finishes.
The Primera Plastics 200 (200 laps | 88 miles) is the 14th of 20 races on the 2018 ARCA Racing Series presented by Menards schedule. Practice begins Sat., July 21 with an hour and a half session planned from 2:30 p.m. – 4:00 p.m. General Tire pole qualifying is set for later in the day at 6:30 p.m. The race is set to take the green flag that night shortly after 9:00 p.m. The event will be broadcasted live on MAVTV, while ARCARacing.com will stream live timing and scoring throughout the day’s activities. All times are local (ET).
Win-Tron Racing PR