JOHN FORCE SET TO CONTINUE SUCCESS ON THE MOUNTAIN 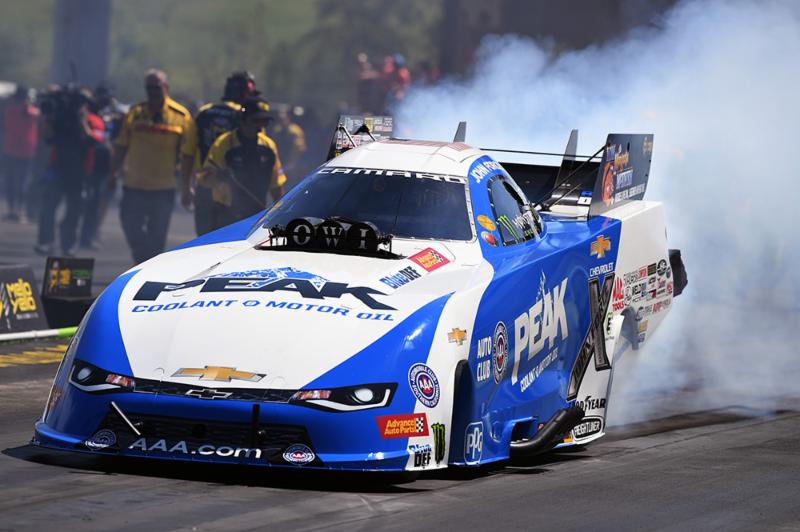 The next time John Force illuminates a win light in his PEAK Coolant and Motor Oil Chevrolet Camaro SS, whether it’s during this week’s 39th Dodge Mile-High Nationals or a later event in the NHRA’s grueling Western Swing, he’ll establish another milestone in a sport in which he has been setting records and winning championships for almost 30 years.
Entering this week’s race at Bandimere Speedway, a track on which he has won a record seven times, the 16-time NHRA Funny Car champion is just one stomp of the accelerator away from winning his 1,300th competitive round.
To put that number in perspective, it would take current Funny Car points leader and Bandimere Speedway record holder Courtney Force 28 seasons just to equal her dad’s record if she maintained her current dominant pace as driver of the Advance Auto Parts Camaro.
Ironically, for the Force family patriarch, the prospect of setting another record won’t be even a blip on the radar when he straps into his 10,000 horsepower hot rod for the start of qualifying on Friday.
Winning another round isn’t the Hall of Famer’s end game.  Banged up as he is after crashing heavily in Phoenix and Chicago, Force still believes he can win a race or two this season and challenge for the Mello Yello Championship, if not this season then certainly next year.
“These young kids working on my PEAK Camaro are getting more confident every weekend,” he said of a crew anchored by Jon Schaffer and Ronnie Thompson.  “We’re finally going A to B and winning rounds.  We had a race car good enough to win in Norwalk (at the most recent event in the 24-race series) and just lost by a nose.
“I’m still beat up, but winning is the best medicine.  Nothing aches when you turn on the win light,” added Force.
Through sheer determination and hard work Force and his PEAK Camaro Funny Car team have pulled themselves back together and qualified in the top half of the field in seven of the last eight races and also picked up two final round appearances. The winningest driver in NHRA history would have one win this season for sure and possibly more if his daughter Courtney Force was not having the dominant season behind the wheel of her Advance Auto Parts Camaro.
“I have been getting better and feeling better,” said Force. “Courtney has been one of my toughest competitors and that makes me very proud as a team owner and father. She has learned a lot of my tricks but I haven’t taught her everything I know. I have the fire in my belly and I want to keep winning races for PEAK and all our sponsors. Denver has been a great track for me and I have to thank the Bandimere family for everything they have done for the NHRA.”
Force has raced to five final at Bandimere Speedway since 2010 picking up three wins. His win record of 19-6 since then is his best stretch on the mountain since he picked up four final rounds including three wins from 1992-1996.
“I don’t know what it is about getting on the side of that mountain but I just love to race in Denver. The crowds are great and my crews have always given me a great race car. I am looking forward to getting to the track and getting back into my office,” said Force.
JFR PR/Photo Credit Auto Imagery