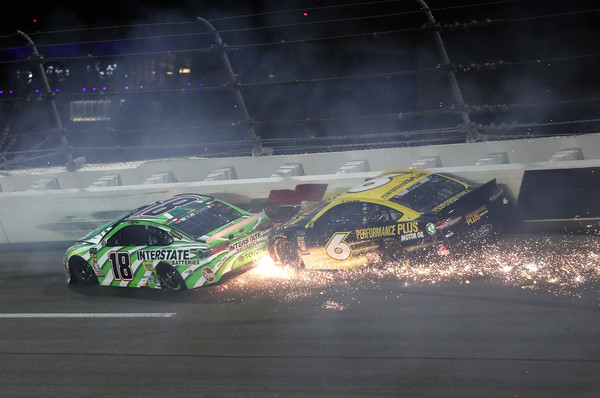 ● The top lane was the fast way around the 2.5-mile superspeedway early in the Coke Zero Sugar 400. Busch was able to make his way to the preferred lane by lap 13. He settled in among the top-20 and made moves as they became available.

● Busch was in the top-10 by lap 25 and then the top-five by lap 37. He continued to make up track position as the laps wound down to the close of Stage 1.

● The Las Vegas native made a bold move on lap 39 and was able to take over second place by the time Stage 1 finished on lap 40.

● During the caution Busch reported that the car was handling on the free side and was starting to handle a little tight at the exits of the turns but attributed that to tire buildup. The team changed four tires, made a wedge adjustment and added fuel. A car farther back in the field blocked Busch into his pit stall a bit, which forced him to have to back up to exit the pits. He was in ninth place for the restart.

● The Interstate Batteries Toyota driver was in the top-10 when the first accidents unfolded. A single-car accident for the No. 21 car brought out a caution on lap 48. Green-flag racing resumed on lap 52. The field was coming around to complete one lap, and then a multicar accident collected almost half the field.

● Busch was able to weave his way through the field and was in fourth place when green-flag racing resumed.

● The 2015 NASCAR champ was in third place when he was tagged by the No. 17 car on lap 66. Busch made contact with another car and then the inside retaining wall before his racecar came to a rest on the inside of the track. The damage was significant enough for the team to have to retire from the race. Busch finished in 33rd place.

“Our Interstate Batteries Camry showed some good speed and patience there in that first stage. We were able to come home second and grab some points there. It’s disheartening for all of our guys on our Interstate Batteries Camry. We try to come down here and have a positive outlook. We try to have a good race, but in all reality you always come to Daytona waiting to crash and figure out when or where, and hope you can walk away from it. But we’ll move on to next week.”

The next event on the Monster Energy NASCAR Cup Series schedule is the Quaker State 400 on Saturday night, July 14 at Kentucky Speedway in Sparta. The race starts at 7:30 p.m. EDT with live coverage provided by NBCSN.