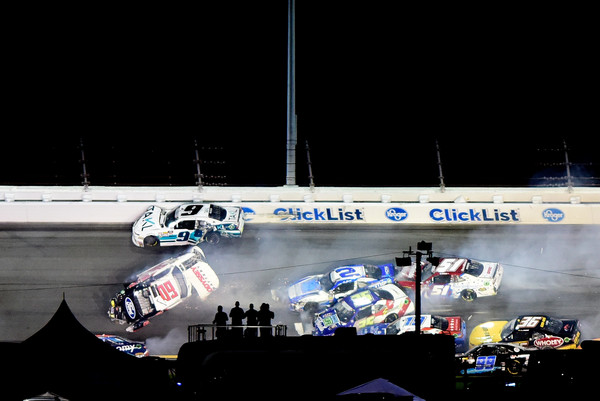 Austin Cindric’s strong, top-five run was cut short Friday night at Daytona International Speedway after his Odyssey Battery No. 60 Ford Mustang was caught up in a late-race caution ending the night early.

“I’m fine, it’s just unfortunate,” Cindric said after a scary crash. “We had such a strong run and it came to an end early. There are plenty of things I can complain about, but I have to be thankful that Roush and NASCAR and everybody else who puts safety first really comes to fruition in situations like that.

“It’s definitely the biggest wreck I’ve ever had. It’s unfortunate I keep having those at Daytona. I’ve got to quit going to this infield care center here. I know all the people and all the faces. They’re very nice, but it’s just a shame. We were giving Odyssey Batteries and the Ford guys and Roush guys a great run and it’s too bad to see us come up short.”

After qualifying was cancelled earlier in the day, Cindric rolled off the grid 23rd in his Odyssey Batteries Ford Mustang. He worked his way up to 12th just 10 laps in, and found himself seventh less than 20 laps into the opening stage. The Mooresville, N.C., native earned valuable stage points to close out stage one in seventh, reporting he was a little free in traffic.

After a two-tire stop under the stage break, Cindric restarted third at lap 35 and held his ground there for the duration, ending the second stage third as the laps progressed.

Once again, the No. 60 crew would put on two tires during the second stage break before restarting fifth for the 34-lap shootout. After a quick yellow, Cindric would once again line up third at lap 77, but four laps later got turned from behind and caught up in a multi-car accident that sent him airborne.

Cindric was evaluated and released from the infield care center and finished 33rd.