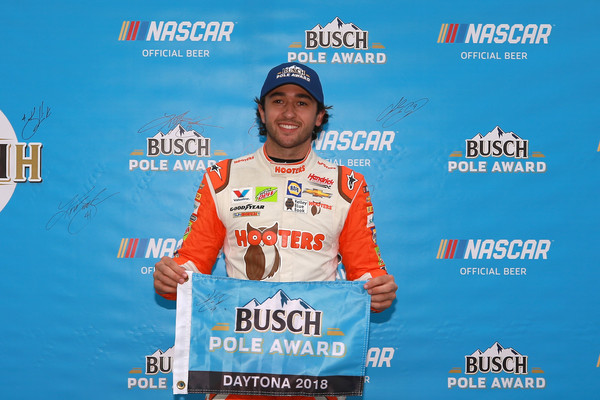 Elliott will lead the field to the green flag driving the No. 9 Hooters Chevrolet. Elliott topped the first round of qualifying that advanced 12 drivers to the second round. He then led that round as well, with an overall fast lap of 194.045 mph on the 2.5-mile DIS tri-oval. Elliott’s Hendrick Motorsports teammate Alex Bowman (No. 88 Axalta Chevrolet) will start second.

Nursing an injured right ankle suffered while “horsing around” in a swimming pool, Elliott nonetheless mashed the gas in the manner fans at Daytona have become accustomed to seeing; he also won the pole for the DAYTONA 500 in 2016 and ’17. And he has three victories at DIS – in 2016, in the NASCAR Xfinity Series and in one of the Duel At DAYTONA qualifying races for both the 2017 and 2018 DAYTONA 500s.

What the 22-year-old driver does not have is a Monster Energy NASCAR Cup Series victory, be it at Daytona International Speedway or elsewhere. As he continues that quest, the “World Center of Racing” – where his legendary father Bill Elliott was so accomplished during his own career – beckons as a seemingly-probable spot for the career breakthrough.

“We put a lot of effort into our [superspeedway program] at Hendrick Motorsports,” Elliott said. “I think this gives everybody confidence. The race is a whole different ball game but to have speed in our Chevrolet is nice.

”We have a fast car, obviously, so I hope that translates to a good race. Hopefully we can execute a good race and try to grab a win.”

Monster Energy Series drivers qualified after minimal track time this weekend; on Thursday, the second of two practice sessions for the Coke Zero Sugar 400 was rained out. Clint Bowyer (No. 14 Rush Truck Centers Ford) had led the first session with a fast lap of 200.799 mph. Bowyer was one of 10 drivers in that practice to post a 200 mph-plus lap.

Approaching the stripe, Justin Haley (No. 24 FOE Chevrolet) pulled off a dramatic move, diving to the inside and getting past Larson and Sadler as the checkered flag flew. Unfortunately for Haley, his momentum had carried him below the double-yellow line on the bottom of the racing surface. NASCAR rules prohibit drivers from going below the double-yellow to improve their position, which dropped Haley to 18th and gave the victory to Larson.

“[Haley] had a massive run, then turned left and did all he could to win but just barely clipped the yellow line,” Larson said. “Honestly didn’t think I had a shot at winning. Little bit of a shock. To win both stages and the race is awesome.”

Qualifying for the Coca-Cola Firecracker 250 was cancelled due to rain, meaning the starting lineup was determined by the Xfinity Series’ car owner championship point standings. That put Ryan Preece (No. 18 Rheem Toyota) on the pole alongside Ryan Blaney (No. 22 Pirtek Ford).

Prior to the Coke Zero Sugar 400 Saturday, reigning DAYTONA 500 champion Austin Dillon will make a 3 p.m. appearance at the “DAYTONA 500 Champions’ Walk of Fame” in front of the DIS Ticket and Tours Building. (This appearance was postponed Friday because of weather.) Dillon and DIS President Chip Wile will unveil a cement block with Dillon’s signature, hand prints and right footprint into the walk lineup. The imprints were made earlier this year following the DAYTONA 500, during the post-Gatorade Victory Lane celebration. The event is open to fans.