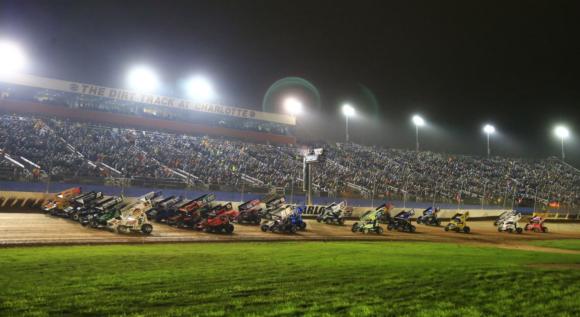 The stars of the World of Outlaws Craftsman Sprint Car Series and the South Eastern Crate Association are ready to converge on The Dirt Track at Charlotte for a Friday night fight on Carolina Clay. Friday’s Outlaw Showdown marks the World of Outlaws’ first of two visits to Charlotte’s high-speed, four-tenths-mile oval this season in what promises to be a thrilling preview of the unforgettable action coming Nov. 1-3 in the World of Outlaws World Finals.

In addition to a star-studded field of Outlaw drivers looking to capture a piece of glory at one of dirt racing’s most spectacular venues, the race will also feature a three-time Coca-Cola 600 winner gunning for victory. Kasey Kahne will go for a fourth win in NASCAR’s toughest test of man and machine on Sunday – but on Friday, Kahne will take on points leaders Donny Schatz, Kasey Kahne Racing driver Brad Sweet and David Gravel in a bid for his first Outlaw win of the season. The Enumclaw, Washington, native has two top-10 finishes in five Outlaw starts this year.

SECA late model hot laps kick off Friday’s action at 6 p.m. with World of Outlaws Craftsman Sprint Car hot laps getting underway at 7 p.m. The SECA A-Main is scheduled for approximately 9 p.m. with the Outlaw Showdown feature slated to begin at approximately 9:40 p.m.

TICKETS:
Tickets to Friday’s Outlaw Showdown, Saturday’s Alsco 300 and Sunday’s Coca-Cola 600 are available at the gates, by visiting charlottemotorspeedway.com/tickets or calling 1-800-455-FANS (3267).