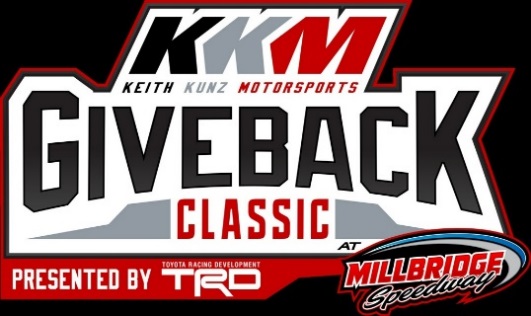 The KKM Giveback Classic is a unique race event open to non-national series drivers of outlaw karts and the winner of the main event will get the ultimate prize for a midget car driver – a ride in a KKM-prepared, TRD-powered midget at the 33rd annual Chili Bowl Nationals in Tulsa, Oklahoma.

KKM and TRD have found success together at the Chili Bowl Nationals for the past four consecutive seasons with Oklahoma-native Christopher Bell capturing the coveted Golden Driller trophy the last two years and former NASCAR Camping World Truck Series driver Rico Abreu winning in 2015 and 2016.

“The KKM Giveback Classic is my way of giving back to the karting community because we’ve had so many talented kids that have come from there,” said Keith Kunz, team owner of KKM. “We’re in a unique situation now that we weren’t in before to be able to give away a ride like this. When the idea first came about, the thought was that KKM would field a car at a regular race, but we wanted to make the Chili Bowl happen. There are a lot of kids out there that will never get the opportunity because they’re never in the right place at the right time and we want to offer someone that once in a lifetime opportunity through this KKM Giveback Classic.”

KKM has become an integral component in Toyota and TRD’s driver development process. Many drivers start their racing careers behind the wheel of a midget like Bell in Oklahoma, who eventually paired with Kunz and his team through TRD. Bell continued to ascend the motorsports ladder while driving a Toyota and went on to capture the 2017 NASCAR Camping World Truck Series championship before moving up to the NASCAR Xfinity Series where he currently competes for Joe Gibbs Racing.

“TRD’s participation with the KKM Giveback Classic is a continuation of an incredible relationship that we have with Keith and his entire organization,” said David Wilson, president of TRD. “Our partnership with Keith has been an integral part of our success when it comes to identifying talent for our driver development program. His TRD-powered midgets that compete in USAC and POWRi races across the country allow us a platform to test and analyze young talent knowing that they’re in highly competitive equipment each time they take to the track. The concept behind the Giveback Classic is just another step towards offering that unknown talent a chance behind the wheel of a KKM midget on one of the biggest stages in motorsports, something that could truly be life-changing for the race winner.”

For more information on the KKM Giveback Classic including registration information and rules, please visithttp://millbridgespeedway.com/driver-info/kmm-registration/ and follow @KKMClassic on Twitter.

Kofoid, Toyota Victorious At I-44 Riverside Speedway in POWRi