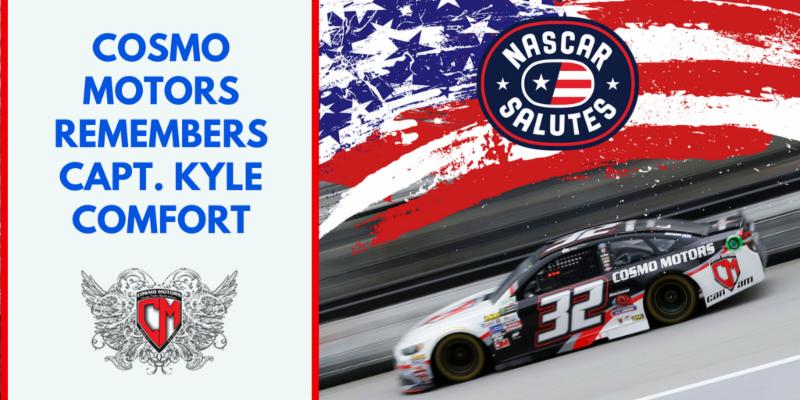 Cosmo Motors, a sponsor of Matt DiBenedetto since 2015, will make their season-debut as a primary sponsor of the No.32 Ford this weekend. Cosmo Motors is a family-owned and operated business out of Hickory, North Carolina, who specializes in rare, fast, and exotic vehicles. While Constantine (Cosmo) Kogan and DiBenedetto are great friends, DiBenedetto is also one of his biggest customers and has bought nearly all of his personal vehicles from the dealership.
For the fourth year in a row, every Monster Energy NASCAR Cup Series team will honor a fallen military service members on their windshield banner for the longest race of the NASCAR season, the Coca-Cola 600.
About Capt. Kyle Comfort:
Capt. Kyle Aaron Comfort, 27, was a Fire Support Officer assigned to Company D, 3rd Battalion, 75th Ranger Regiment at Fort Benning, Ga.. He was born on Oct. 17, 1982 in Alabama. He was killed in action on May 8, 2010 during a combat operation in Helmand Province, Afghanistan.

After graduating from
Jacksonville State University, Jacksonville, Ala., in 2006 with a Bachelor of Science Degre
e in Criminal Justice, Comfort was commissioned as a Field Artillery Officer.
He initially served as a company Fire Support Officer and Platoon Leader with the 2nd Battalion, 502nd Infantry Regiment and 1st Battalion, 320th Field Artillery Regiment, both of the 101st Airborne Division, Fort Campbell, Ky. He deployed to Iraq from October 2007 to November 2008 with the 101st.
He then completed assessment and selection for assignment into the 75th Ranger Regiment in February 2010 where he subsequently served as a Fire Support Officer for Company D, 3rd Battalion, 75th Ranger Regiment stationed at Fort Benning, Ga. He was on his first deployment to Afghanistan.
Comfort’s military education includes the Field Artillery Officer Basic Course, Air Assault Course, Basic Airborne Course and the U.S. Army Ranger Course.
His awards and decorations include the Ranger Tab, Parachutist Badge and the Air Assault Badge. He has also been awarded the Bronze Star Medal, National Defense Service Medal, Iraq Campaign Medal with combat star, Global War on Terrorism Service Medal, Army Service Ribbon, and Overseas Service Ribbon.
He was posthumously awarded the Purple Heart, Bronze Star Medal, Meritorious Service Medal and Combat Action Badge.
DiBenedetto on the NASCAR Salutes Weekend:
“I’m really excited to have Cosmo Motors back with us at Go Fas Racing. Cosmo is one of my best friends and he’s been a huge help with my career. It’s really cool that we’re able to use this race, the longest one of the season, to honor our fallen military members. My brother is currently in the military so this is very close to my heart and my family. We’re very thankful for our military and know that we wouldn’t have the freedom to do what we love and be with the people we love without them fighting for us. I want to personally thank the family of Capt. Kyle Comfort for allowing us to honor him.”
Go Fas Racing PR