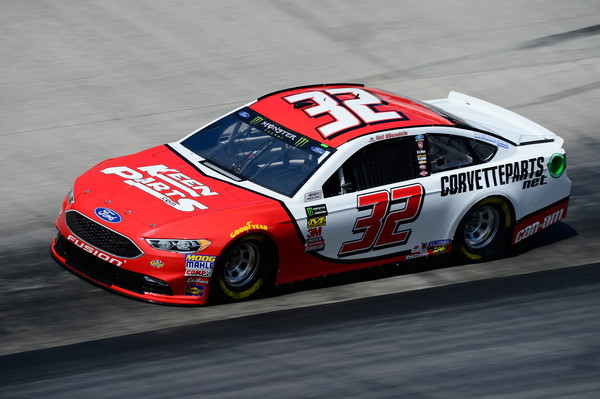 Matt DiBenedetto will be the first person to say that he hasn’t had the best luck at Dover International Speedway. With an average starting position of 34th and average finish of 32nd over six starts at the 1-mile oval, the luck is bound to turn for him and the No.32 CorvetteParts.net team. DiBenedetto has always considered Dover to be one of his favorite racetracks, but bad luck has spoiled his efforts in the past.
If there was ever a right time for him to be heading there, it’s right now. With new Crew Chief Randy Cox at the helm, the team is on one of the strongest streaks they’ve ever had. They’ve averaged an 18th place finish over the last four races, and DiBenedetto has been able to capitalize on tracks like Richmond that he struggled at in the past. The CorvetteParts.net team hopes to do the same thing at Dover this weekend.
Moving Up the Points Standings:
Heading into Talladega Superspeedway, the Go Fas Racing team sat 31st in points. With a clean race-car and 19th place finish at the second plate-race of the season, DiBenedetto and the CorvetteParts.net team moved up three spots in the standings to 28th. With a small gap to 27th (+4 points) and 31st (-4 points), DiBenedetto and the CorvetteParts.net team know that this weekend could prove to be pivotal for the overall points standings. The team has little room for error, but can also continue to capitalize on strong runs to move forward.
Last Week for the No.32 Team:
The No.32 team was in Talladega, Alabama last weekend at the largest oval on the NASCAR circuit. The Can-Am / Wholey’s team qualified 33rd, knowing that their qualifying position would have little to do with their result on Sunday. Although the starting position was not one of the team’s best, they knew they had something to battle with come race time.
The first two stages were a strategy play for the Can-Am team / Wholey’s team. DiBenedetto dropped back in the field to avoid some of the major crashes. Unlike most Talladega races, the race only saw two mildly large crashes, rather than one or two major crashes, but DiBenedetto was able to avoid both without damage and even led six laps in the middle of the second stage. In the final stage, DiBenedetto restarted just outside of the top-10, but a hard battle caused him to fall back into the second pack, where he brought the No.32 Can-Am / Wholeys Ford home 19th.
DiBenedetto on Dover International Speedway:
“Dover is such a fun place to race at. Over the past couple of years, the groove has spread out a lot more than the past, and the racing has gotten really good. I’ve never really had the best of luck there, but we’ve actually had good race cars there from time to time. I’m excited to be going there with [Crew Chief] Randy Cox, it’ll be a fresh start that hopefully turns our luck around. We’re trending upwards right now, so it’ll be a big weekend for our CorvetteParts.net team to keep moving forward.”
Matt DiBenedetto Career Monster Energy NASCAR Cup Series Stats at Dover International Speedway:
Starts: 6
Average Start: 32.1
Average Finish: 33.7
Best Finish: 27th (2016)
Go Fas Racing PR/Photo Robert Laberge/Getty Images
Post Views: 225