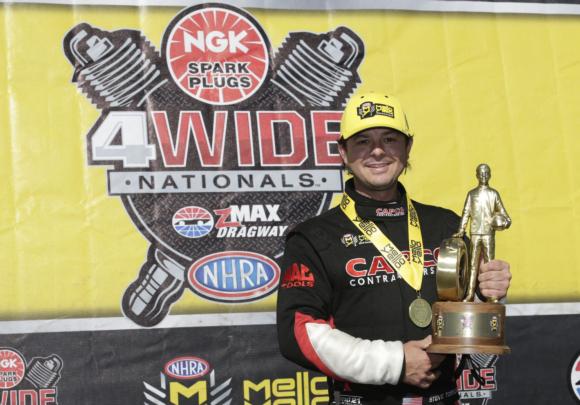 Steve Torrence may not have a secret to winning four-wide drag races, but the independent driver could’ve fooled everyone after Sunday’s NGK Spark Plugs NHRA Four-Wide Nationals at zMAX Dragway. Torrence set a torrid pace in the final round of four-wide eliminations, posting a 3.813-second pass at 326.56 miles per hour – more than enough to clinch his second consecutive victory in the NGK Spark Plugs NHRA Four-Wide Nationals.

“It’s pretty unbelievable,” said Torrence, who also won the four-wide event at The Strip at Las Vegas Motor Speedway on April 8. “The car performed flawlessly. It did everything it was supposed to. The team deserves the success. I just drive the race car and try not to do anything dumb. They cover my butt.

“If I honestly knew what the recipe (to winning four-wide races) was, I’d try to write it down so I wouldn’t forget.”

Another independent driver, Cruz Pedregon, lit up the win light in Funny Car competition. Pedregon edged out his longtime friend and rival, John Force, with a 310.84-mph pass in 4.059 seconds – a .039-second margin of victory – to claim the win and snap a 92-race winless streak dating back to 2014.

“Ninety-two is a good number because that’s also the year I won my first championship,” said Pedregon, who became the fifth different winner in six Funny Car races this season. “I didn’t actually believe my ears when I heard we won. It was surreal. It’s still a little bit surreal. I cannot believe we won this race. It’s pretty cool.

“I thought at one point, ‘Man, maybe I’m not destined to win anymore.’ I don’t want to do this if I don’t feel like I’m competitive. This is a lot of stress. I have a daughter who’s seven and this is a lot of travel. … This might be the best, sweetest victory of my career. I’ve been fortunate to drive some good cars and win a lot of races but this one’s big. It meant a lot to me that our competitors, John Force and Courtney Force, came up and congratulated me.”

Erica Enders posted her first Pro Stock victory of the season with a 212.73-mph pass in 6.535 seconds.

“I’ve never won a four-wide race so this is definitely significant to me,” Enders said. “To be able to come back and win the four-wide is great. I have the best team of guys in all of motorsports.”

“We got after it and it showed,” Savoie said after an emotional celebration. “It’s pretty cool. I don’t have the best reaction times on the bike, as everyone knows, but I cut a decent light.

“The whole crew gave me a tremendous car all week long,” Gonzalez said. “Anywhere we land in this tough field is a win, that’s how I look at it. I can’t say enough about my team. They’re a tremendous crew. The car has been amazing.”

TICKETS:
Tickets, camping and race-day upgrades to the Oct. 12-14 NHRA Carolina Nationals at zMAX Dragway are available by calling the speedway ticket office at 1-800-455-FANS (3267) or shopping online at www.charlottemotorspeedway.com.