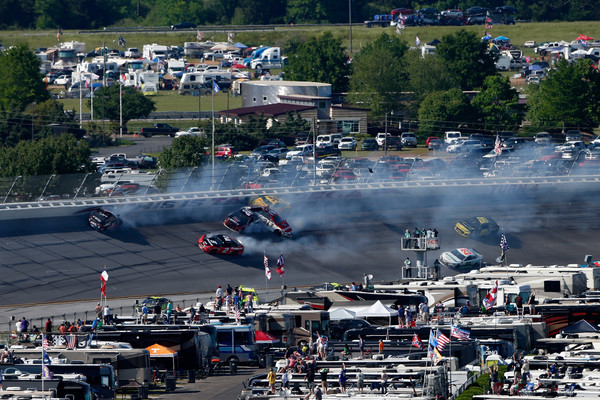 ● Bowyer and many drivers reported their cars were difficult to turn.

● Pitted under green on lap 15 to top off fuel, then returned to the pits the next lap with a cut right-rear tire.

● Pitted under green to top off fuel on lap 67.

● Bowyer fell one spot short of earning the free pass and returning to the lead lap at stage’s end.

● Moved into the free-pass position as soon as the stage started. A much-needed caution flew on lap 127, returning Bowyer to the lead lap running in 27th.

● Bowyer made a scheduled green-flag stop for fuel only with 43 laps to go.

● Restarted the race in ninth with 30 laps remaining.

● Bowyer was not hurt, but the car was too badly damaged to continue.

● Bowyer came into Talladega riding a four-race streak of top-10 finishes. His 31st-place result in the GEICO 500 was his first this season outside of the top-20.

● Joey Logano won the GEICO 500 to score his 19th career Cup Series victory, his first of the season and his third at Talladega. His margin of victory over second-place Kurt Busch was .127 of a second.

● There were six caution periods for a total of 29 laps.

“I don’t know if he got loose or was trying to get in a hole, but the 48 (Jimmie Johnson) wasn’t clear and wrecked a bunch of us. That was just kind of par for our day. It started when we locked the right-rear wheel up somehow coming to the pits and flat spotted that and had to come back in. We finally got two laps back, I got one lap back and then finally got on the lead lap, and then we wrecked. Par for the course.”

The next event on the Monster Energy NASCAR Cup Series schedule is the AAA 400 Drive for Autism on Sunday, May 6 at Dover (Del.) International Speedway. The race starts at 2 p.m. EDT with live coverage provided by FS1 beginning with a prerace show at 12:30 p.m.