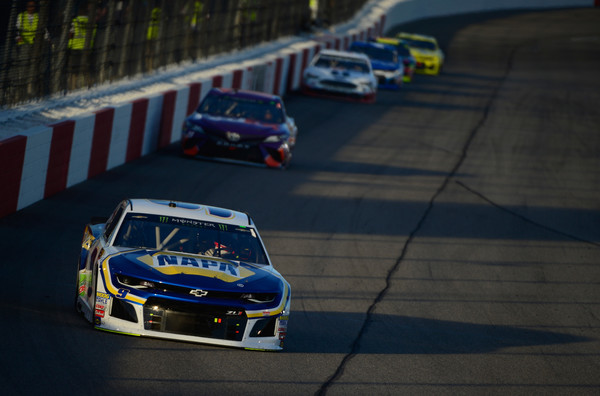 Multiple late race restarts and short runs allowed Chase Elliott to drive his No. 9 Napa Auto Parts Camaro ZL1 to a runner-up finish at Richmond Raceway, the ninth race of the 2018 Monster Energy NASCAR Cup Series season.  The run is the eighth second-place finish of Elliott’s career as he continues his quest to capture his first Cup Series victory.  The effort marked the 22-year-old driver’s second top 10 finish in six races at Richmond, and fourth top 10 finish thus far this season.

“We had a big fight from our Napa Auto Parts and Napa Brakes Camaro ZL1 team tonight,” Elliott said after the race.  “We just have a lot of work to do, I still feel like, to get to have the speed that we need and the car driving like we want it to or like I want it to at least.  But our restarts fell into our hands there at the end having short runs kind of played into our favor and was able to move forward because of that.  So, circumstances were on our side tonight, which is not normal, so I’m happy about that.”

Rookie of the Year contender, William Byron, No. 24 Axalta Camaro ZL1, backed up a solid qualifying effort by earning stage points in both of the first two stages of the 400-lap/300-mile event and finished as the highest rookie in 12th.

Next week the Monster Energy NASCAR Cup Series heads to Talladega Superspeedway for the GEICO 500 on Sunday, April 29th at 2:00 pm, ET.

THE MODERATOR:  We’ve also been joined by our second‑place finisher, Chase Elliott, driver of the No. 9 NAPA Chevrolet.

Chase, we’ll go to you quickly for a quick recap of your night to come home in second place here at Richmond.

CHASE ELLIOTT:  Yeah, just very fortunate circumstances there at the end for us with the way the restarts went.  Having a short run there at the end was definitely in our favor.  So, it was nice to be on the good end of things for the first time in a while.

Looking forward, we have to be realistic about how we ran tonight.  I think the result shouldn’t weigh into how hard we worked this week because we have some work to do.  I think that we have to keep that in mind.

THE MODERATOR:  We’ll continue with questions for Chase.

Q.  For both of you, the first two stages went clean and green outside of the competition cautions.  Are you surprised by that?  What creates the long green‑flag runs?

CHASE ELLIOTT:  Yeah, I mean, I would say similar response.  I think, you know, we have two planned debris cautions each race.  I think that’s kind of how they view that now, which is perfectly fine.  It’s how the race would naturally play out without them.  I don’t have an issue with it.

Q.  The night races here typically start a little after 7:30. This one started after 6:30.  How much does that affect the track and change your race and your respective plans throughout the course of the evening?

CHASE ELLIOTT:  Yeah, it was definitely a little different.  The sun was a little bit of a pain there as it was setting on the backstretch.  It’s a different dynamic than I’ve been used to here, at least in my few starts on the Cup side.

I feel like the track did take a little bit after swing.  I thought the guys ‑‑ there were a couple guys good at the beginning that were really bad when it got dark.  Definitely a swing of events there.

Q.  Chase, there’s been a lot of fan reaction on Twitter throughout the earlier course of the race saying it’s all a Ford and Toyota show.  Do you feel Hendrick is catching up?  Where have you seen gains if that’s the case?

CHASE ELLIOTT:  Yeah, I mean, I think we’ve been getting better, for sure, over the course of the past handful of weeks.  I thought last week was really probably our best effort as a company.  Obviously, we crashed at the beginning.  I felt like our car was solid throughout the whole weekend.  Obviously, our teammates ran well.

I think we have to continue to be realistic with ourselves.  We can’t look at the results tonight and think we’re right there, because in reality I think we still have some work to do.  I think anybody amongst our team would say the same thing.  I’m not knocking anyone, anybody on my team or whoever, but we all know we need to do better.  I think we just have to be realistic with ourselves.

THE MODERATOR: Chase, thank you for your time.