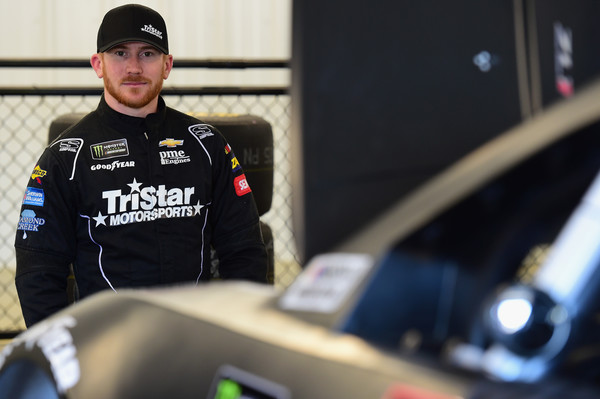 Stage 1
Cole Whitt rolled off the grid in the 35th position in the No. 72 Chevrolet Camaro ZL1 at Richmond Raceway to start the Toyota Owner’s 400
Lap 28: Running 34th, Whitt relayed the No. 72 was loose in, tight in the center and loose off; a condition he would continue to battle for the duration of the race.
Lap 60: Whitt had fallen a lap down from the leader and reported he was having brake issues.
Stage 1 Completion Caution (Lap 100): Whitt was posted 33rd, one lap down. Crew Chief Frank Kerr called for ½ round out of the right rear, 1/16 packer pulled from left front, four tires and fuel
Stage 2
Whitt took the Stage 2 green flag restart 26th, one lap down
Lap 150: Whitt continued to experience the same conditions. He radioed he was sideways in, dead tight in the center and sideways off
Stage 2 Completion Caution Lap 200: Whitt completed the stage 32nd, two laps down. He pitted for four tires, fuel and a chassis adjustment to the No. 72
Stage 3
Whitt was scored 29th, two laps down for the start of Stage 3
As Stage 3 became a long green flag run, Whitt was scored as high as 25th during green flag pit stops. On Lap 285 he came in for four tires, fuel and chassis adjustment
Caution Lap 355 (incident): Whitt sustained minimal damage. He pitted to assess the damage and receive four tires and fuel
Caution Lap 369 (fluid on the track) / Caution Lap 391 (incident): Whitt stayed out to take the wave around
Caution Lap 397 (debris): Whitt pitted for four tires and fuel
Whitt continued to battle and ultimately secured a 30th place finish in the No. 72 at Richmond Raceway.
TriStar Motorsports PR/Photo  Jared C. Tilton/Getty Images

Bubba Wallace 22nd Under The Lights at Bristol

Alex Bowman Finished 16th at Bristol; Seeded 7th In The Round of 12 Heading To Vegas

Ryan Preece Gets a Top Ten In Bristol