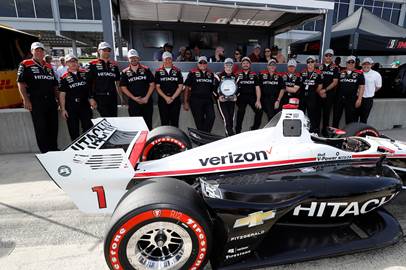 BIRMINGHAM (April 21, 2018) – Josef Newgarden makes no secret of the fact that he considers Barber Motorsports Park is his home track, as well as, one of his favorites; and his performance on the 2.38-mile, 17-turn natural terrain road course confirms his statement.  In six starts, the driver of the No. 1 Hitachi Team Penske Chevrolet has two wins, three podiums, and five top-10 finishes.

But, before today, he didn’t have a pole.  With a lap of one minute, 07.4413 seconds/122.773 mph, the defending Verizon IndyCar Series (VICS) champion changed that statistic and beat his teammate Will Power, No.12 Verizon Chevrolet, by a mere .0128 of a second to claim the No. 1 starting position for race four of the 17-race VICS season.

Newgarden’s pole is the 75th for the Chevrolet 2.2-liter V6 twin turbocharged direct injected engine since the Bowtie returned to VICS competition in 2012.

The Team Penske duo of Newgarden and Power were two of the finalists in the Firestone Fast Six that ran for the pole honors.  Sebastien Bourdais, Ryan Hunter-Reay, James Hinchclliffe and Scott Dixon (all Honda) comprise starting positions three through six after the completion of the six-minute final round of qualifying.

The remaining Team Chevy drivers will start as follows:

Joined by Will Power, who will be starting second. Will is a two-time winner here, four poles. Will had the fastest time of the weekend earlier this weekend with practice three and has qualified for all three Firestone Fast Sixes so far this season.

Will, I know you were hoping to get your fifth pole here. Do you feel like you got everything out of the car?

THE MODERATOR: You have some strong teammates. Does that help you in a race where weather might play a role?

WILL POWER: Yeah, no, I just think it’s going to be difficult for everyone.

THE MODERATOR: We’ll open it up for questions for Will.

Q. How much does rain throw all the strategy out the window?
WILL POWER: Well, yeah, I mean, we’ve run a dry setup in the past. We ran a rain setup, then it dried up. A rain setup, rain obviously changes the strategy a lot. Just have to concentrate more.

Q. (Question regarding poles.)
WILL POWER: It’s been just crazy. I’ve been, like, there. I’ve sat on the front row, just not there in the Fast Six. It’s getting closer. Down to hundredths. I think I should be able to get one.

Q. (Question regarding Josef.)
WILL POWER: It’s really interesting. We’ve made big setup changes because the cars are very different to what we’ve been running. I think everyone is on their toes to get the philosophy right each weekend.

THE MODERATOR: Will, thank you very much. Good luck tomorrow.

WILL POWER: Thank you.

Josef, the lap at the end of the qualifying session was a monster lap. What came together.

JOSEF NEWGARDEN: We just had a good car, for sure. It’s been fast all weekend. We didn’t have the best practice three, but I think everybody closed up a lot. Andretti guys closed up a lot.

Like I said, trying to put it together was the big thing for us. We tried to make a car that could be drivable. It sounds silly, but this morning it was tough to put a lap together. Creating drivability, comfort in the car is what we focused on. Felt pretty good in qualifying.

I think I had a really good set of tires with the reds, the second set were pretty good. Pretty excited with that. Still pretty strong in the Fast Six.

THE MODERATOR: Questions for the group.

Q. Four different teams represented. That says a lot about the competition.
JOSEF NEWGARDEN: For sure, it’s difficult for everyone with the points, too. I think you’re going to see that this year. Until everyone settles in, you’re going to have a lot of up and down amongst the group. Even this weekend, people are figuring things out.

It’s just tough. It’s really competitive. Everyone seems to have pretty decent cars. Yeah, it’s just difficult, which is a good thing. I think it’s great for the fans. If there’s insecurity for everybody, you don’t know who is going to be strong.

Q. With the weather forecasted for tomorrow, all four of you have experience driving on this track in the rain. Makes it more important to start in the front, doesn’t it?
JOSEF NEWGARDEN: Yeah, for sure (laughter). To get in the Fast Six, it helps a lot. If it’s going to be wet all day tomorrow, you’re going to want to be out front. There’s no guarantee for that. You can go backwards fast. You’re relying on peripheral vision to get around the racetrack. Just depending on how aggressive the rain is, it will be a benefit to be all the way up front.