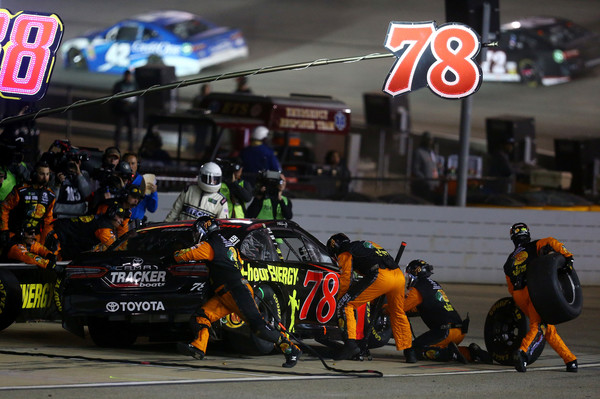 Martin Truex Jr.’s 14th-place finish did not by any means correlate to his performance in Saturday night’s Toyota Owners 400 at Richmond Raceway.
Truex led a race high of 121 laps and was contending for the win with 10 laps remaining. But then things started to take a sudden turn in the wrong direction in his 450th career NASCAR Cup Series start.
While running second Truex’s No. 78 Bass Pro Shops/5-hour ENERGY Toyota came down pit road for fresh tires following a caution on Lap 390. Unfortunately, there were issues on the pit stop and Truex dropped to 11th place.
He picked up three positions before another caution came on out on Lap 397. The team took a gamble to come down pit road for a new set of Goodyears, hoping that would give Truex a better chance of gaining more positions. The strategy didn’t work out since a number of teams ahead of Truex did not pit.
Truex came on strong during the second half of the race. He radioed his crew chief Cole Pearn to tell him, “I don’t know what adjustments you made but the car is a lot better.”
Truex appeared to be pulling away from the field before a caution came out with 30 laps to go. He came into the pits for service but dropped to third in track position when he exited pit road.
He was rightfully frustrated after the race.
“Tonight we beat ourselves, so that’s unfortunate,” said Truex, who started on the pole.  “Pretty disappointed that we didn’t get at least a chance. I don’t know what we have to do to win at one of these short tracks and get everything to go the way we need it to.”
Truex added, “The guys did a really good job with the race car. We were awful at the start of the race and I thought we were really in trouble. Just fought all night long and tried to stick with it and make good adjustments, and put ourselves in position to try to win another one and just came up short. Frustrated, but proud of everyone for the effort and hopefully we’ll get them next week (at Talladega).”
Truex finished ninth in the first two stages and remains seventh in the driver point standings.
The race winner was Kyle Busch. Rounding out the top-10 in order were: Chase Elliott, Denny Hamlin, Joey Logano, Kevin Harvick, Jimmie Johnson, Kyle Larson, Brad Keselowski, Clint Bowyer and Daniel Suarez.
The race had six cautions for 46 laps and there were 16 lead changes among seven drivers.  Truex led four different times for 121 laps.
The next race is Sunday, April 29 at Talladega (Ala.) Superspeedway.
FRR PR/Photo  Sarah Crabill/Getty Images

Even Off Track, Matt DiBenedetto is a Mustang Man