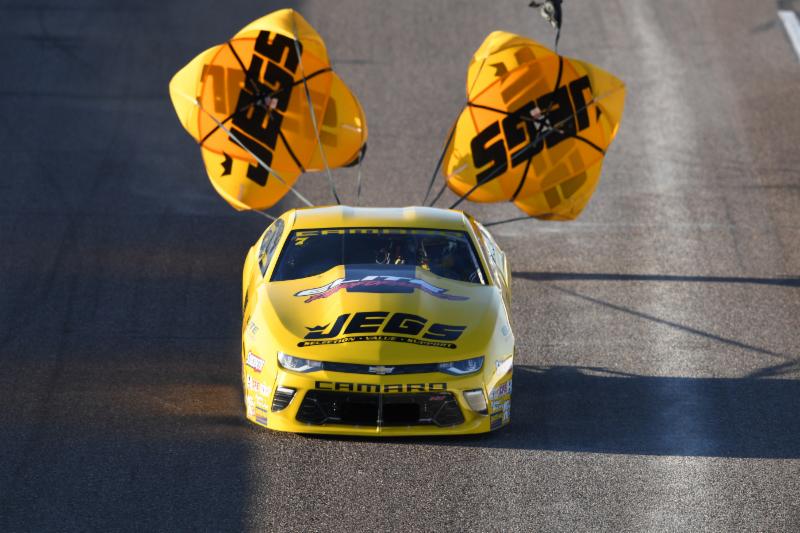 Five of Jeg Coughlin Jr.’s remarkable tally of 76 national event victories have come at Royal Purple Raceway, making this weekend’s 31st annual NHRA SpringNationals at the legendary southeast Texas speedplant the perfect place for the JEGS.com-sponsored pro to turn his fortunes around.
“We’ve been tripping on our shoelaces lately, trying so hard to find the perfect balance to get back to our winning ways, and I can’t think of a better place for everything to come together than Houston,” Coughlin said. “I’ll admit to being very partial to this track and this event. The memories I have here are some of my all-time favorites.

“Early on, I remember when my brother Troy was first getting into Pro Stock and we’d come down here in the off-season for the Pro Stock Superbowl and test his car,” Coughlin said. “That’s really when I first started dreaming about racing Pro Stock. I also got my first sportsman win in Super Stock here in 1994 and then came back three years later in what was just our second ever Pro Stock win and got another Wally.”

Coughlin later added three more Pro Stock victories in Houston, taking home the top prize in 1998, 2000, and 2010. He also logged runner-up results here in 2009 and 2017.
“I’ve always felt that early Pro Stock win in Houston gave us such a huge start to our professional career,” Coughlin said. “It really paved an optimistic path for our program and that continued through five world championships, which is just remarkable.
“We’re very hungry for more success. This team has won championships and everyone on this crew is top rate. We have everything we need to win races and contend for the title, but of course there are several teams that can say the same thing. It’s a very tough class and the ones that put the puzzle pieces together the best are the ones that are happy on Sunday evening.”
For the second race in a row, Coughlin and the JEGS.com/Elite Performance crew will enter a different car into competition. This time it’s a Chevrolet Camaro that former Elite Performance customer Larry Morgan drove at the end of last season.
“It’s a proven car, one that Larry out-qualified me with a few times last year when he came out to have some fun,” Coughlin said. “We feel very confident that when we put the full attention of Rick and Rickie Jones, Mark Ingersoll and Brian Self on getting it up to Elite standards, we’ll have a
strong racecar.
“We’re also back to the brilliant yellow and black JEGS theme, which I’m excited about. I think we’re due for some success. It’s been awhile since we’ve savored a victory and we’re all ready for that feeling again.”
Pro Stock qualifying sessions are scheduled for 4 and 6:30 p.m., Friday, and 1:30 and 4 p.m., Saturday. Eliminations begin at noon, Sunday. FOX Sports 1 will carry the first day qualifying action live from 8:30-9:30 p.m., Friday, with more qualifying highlights airing from noon-1 p.m., Sunday. Live eliminations will air on FOX Sports 1 from 1-4 p.m., Sunday. (All times are local and subject
to change.)

Jeg Jr. won his first Pro Stock race in Houston in 1997 when he defeated Mark Osborne in the final. It was his second start in the Pro Stock class. Jeg Jr. has also earned Pro Stock titles at Royal Purple Raceway in 1998, 2000, and 2010, beating Tom Martino, Jim Yates and Allen Johnson, respectively.
In addition to his four Pro Stock wins, Jeg Jr. was runner-up at the SpringNationals in 2009 and 2017. Last year, he lost to eventual world champ Bo Butner in the final.
As a sportsman racer, Jeg Jr. won the Super Stock title in Houston in 1994, giving him a total of five wins at the facility.
In 20 career appearances at Royal Purple Raceway, Jeg Jr. has a 37-16 record in Pro Stock eliminations.
Jeg Jr. is a five-time NHRA Mello Yello Drag Racing Series Pro Stock champion. He earned season titles in 2000, 2002, 2007-2008 and 2013. As a sportsman driver, Jeg Jr. also claimed the NHRA Super Gas championship in 1992.
Jeg Jr. is NHRA’s all-time leader in holeshot victories with 101. Five of those holeshot wins have come in Houston.
Jeg Jr. has been the No. 1 qualifier in Pro Stock 23 times in his career including the 2017 Houston race. All told, Jeg Jr. has been the low qualifier three times in Houston, in 2007, 2013 and 2017.
Team JEGS – By the Numbers
5 Wins for Jeg Coughlin Jr. in Houston, (four in Pro Stock and one in Super Stock).
7 Different classes where Jeg Coughlin Jr. has won at least one NHRA national event title (the only        driver to do so)
10 Number of classes where the Coughlin family has earned an NHRA national event victory
101 Holeshot wins by Jeg Coughlin Jr. in the Pro Stock class (tops among NHRA pro drivers)
Team JEGS PR