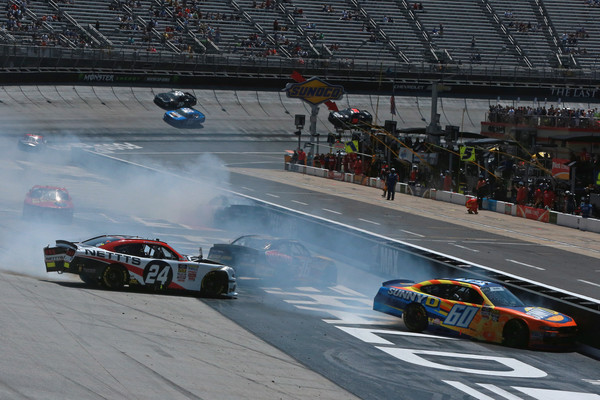 Ty Majeski got caught up in two early incidents during Saturday’s NASCAR Xfinity Series race at Bristol Motor Speedway, with the second dealing enough damage to his No. 60 SunnyD Ford Mustang to end his day at Lap 100 of the race. Majeski was scored with a 34th-place finish.

“We just got caught up in that first wreck really early in the race and got some left-front damage,” said Majeski. “We had a flat left-front and went two laps down and could never really recover from that. We were just racing in the back and when you’re racing in the back like that there’s nowhere to go here at Bristol when stuff happens in front of you.”

Majeski started the race from the 14th position after advancing to the second round of qualifying Saturday morning. Almost immediately a multiple-car wreck occurred, with Majeski sustaining a flat tire and left-side damage to his SunnyD Mustang.

Crew chief Mike Kelley called Majeski to pit road to repair damage and change tires, but a long green flag run saw the No. 60 lose a lap to the leaders just before the lap 45 competition caution. While pitting during that caution, Majeski was assessed a penalty for pulling up to pit and he would restart 34th, two laps behind the leaders.

Without an opportunity for an extended green flag run, Majeski could not advance his position and he would end the first stage of the race in 32nd place. That position put him behind a majority of the field for the stage 2 restart, where Majeski was unable to avoid a wreck ahead of him. The left-front damage on the SunnyD Mustang was too severe for the team to continue, and Majeski was scored with a 34th place finish.