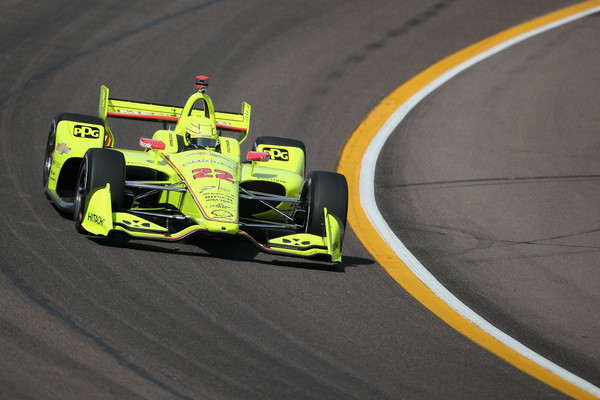 Simon Pagenaud came within eight one-hundredths of a second of starting tomorrow night’s race where he ended the ISM Raceway event in 2017 – first.  But the driver of the No. 22 Menards Team Penske Chevrolet had to settle for the second starting position for the Desert Diamond West Valley Casino Phoenix Grand Prix at the Avondale, Arizona facility.

With a two-lap qualifying average speed of 188.148 mps with a total time of 39.1096 seconds, the 2016 Verizon IndyCar Series (VICS) champion held the top-spot on the leaderboard until the final competitor took to the track to qualify.  Sebastien Bourdais grabbed the top spot with Pagenaud in second and teammate Will Power, No. 12 Verizon Team Penske Chevrolet, in the third qualifying position.

Defending VICS champion Josef Newgarden put his No. 1 Verizon Team Penske Chevrolet in seventh in the final order of 23 qualifiers.  2004 champion, Tony Kanaan, No. 14 ABC Supply AJ Foyt Racing Chevrolet, landed in ninth on the leaderboard at the conclusion of qualifying.

THE MODERATOR: We will go ahead and get started with our Verizon IndyCar Series post qualifying press conference for the Desert Diamond West Valley Casino Phoenix Grand Prix. Joined by Simon Pagenaud, in second place.

THE MODERATOR: Simon is driving the No. 22 Menards Team Penske Chevrolet for Team Penske. It is his career best start here at ISM Raceway.

Simon, you came so close, hoping for one further up the leaderboard there. But tell us about the condition of the track, your session, and your philosophy heading into tomorrow’s race.

No, it was fun. What a phenomenal qualifying session for our team. We were mid pack. I knew we would go faster at the end. When you see the lap time hold on, you hope. The hope was strong.

Congratulations Seb. Very cool, we have a French front row on an oval. It’s rare. It’s very cool for him, too. He’s obviously having great success right now. Well deserved. It’s good for him.

But we’re friends and want to beat each other really bad. He got me today. I’ll try to get him tomorrow.

But the conditions were a lot easier this afternoon. This morning was super tough. Very, very difficult. Very greasy. The cars were sliding around, which actually I thought was good because driving was really difficult.

This afternoon with the temperature going down for qualifying, it got better, everybody got better. It was easier to drive. I would say qualifying was not as challenging as this morning practice. I think the race is going to be quite similar to qualifying.

Yeah, the cars are fun to drive. So far I love it. Hopefully we can bring another trophy.

THE MODERATOR: A lot of drivers that have been in here today have mentioned that the track seems a lot different than in February when we came here and tested for the preview. Have you observed that, as well?

SIMON PAGENAUD: Yes. It was very slippery, almost like there was some kind of oil on the track. Wow, it was probably one of the hardest sessions I’ve been in in a long time on an oval.

But again, I think difficulties bring challenges. It shows which cars are better, which drivers are doing a better job. So I really enjoyed it, even though it was tough.

But, yeah, I think tonight is going to be an interesting night. We’re obviously all going to work on our race setup. So far we’ve only been working on qualifying setup. But I’m expecting the track to be a lot closer tonight than it was at the test. Yeah, we’ll see. It’s been fun so far.

THE MODERATOR: Questions for Simon.

Q. Simon, just a personal question. You said it earlier, you have a French front row. What is your personal opinion: Do you think the French media will skip the Formula One Grand Prix in Bahrain?
SIMON PAGENAUD: Maybe there will be a big party tonight in France with a lot of wine. No, it’s great. It’s fantastic for the sport because for us it brings attention. Sebastien Loeb was actually doing the Corsica rally this weekend and he crashed out. There’s one less French to watch.

It’s going to be good for us to see this kind of performance for IndyCar as well overseas. It’s really cool.

Unfortunately there’s serious jetlag with Europe right now. It’s a little tough to follow the race. Yeah, we’ll try to do our best for France.

Q. When you were one of the stars of the Atlantic Series back in ’06 and ’07, Sebastien was out there winning the championships in Champ Car at that time. Are you seeing him drive as well now as he did since that championship run he had?
SIMON PAGENAUD: Well, I mean, that’s a long time ago. I tell you what, he was the king then. Then I had a chance to be his teammate with Peugeot in Le Mans, the 24 Hours of Le Mans. We were teammates for several years. I got to see how he drives the car, how he prepares.

He’s a phenomenal driver, one of the best that has existed quite frankly. So it’s been really cool to be his teammate, to be his friend. I’m glad to see his success.

After what happened last year, I can tell you, it’s really enjoyable to see him doing so well.