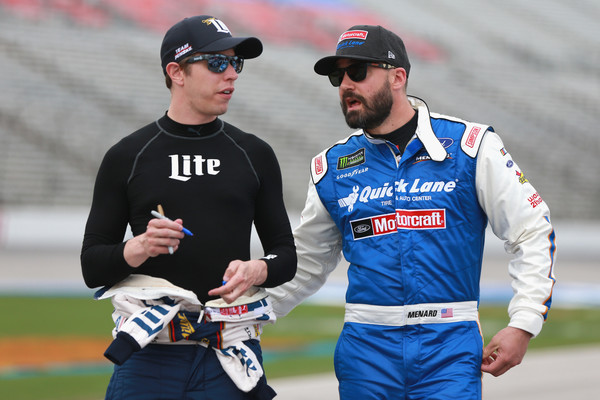 Paul Menard and the No. 21 Quick Lane team were poised for a strong qualifying performance at Texas Motor Speedway on Friday afternoon when Mother Nature cut the qualifying session short and left Menard and the team with the 19th-place starting spot for Sunday’s 500-miler.

Menard was 17thfastest in the opening practice session with a best lap at 193.750 miles per hour and then posted a lap at 194.426 mph in his first run against the clock in what was scheduled to be three rounds of knockout qualifying.

Before the second round could commence, lightning in the area led officials to cancel the remainder of the qualifying due to safety considerations.

For Menard and the Quick Lane crew, the turn of events was disappointing because they felt they had saved plenty of speed for the later qualifying rounds.

“Paul ran a conservative lap, just fast enough to be assured of being among the 24 drivers that advanced to the second round,” team co-owner Eddie Wood said.

Late in the session, Menard was in 14thplace, but five drivers made an additional run and went faster than before, dropping him down five spots in the line-up.

“The drivers that went out a second time went faster, and based on that we should have been faster on our second run too,” Wood said. “Everything was going according to plan until the lightning showed up.”

Wood did not find fault with the decision to end qualifying after the first round.

“They made the right call,” he said. “You have to think about the safety of camera operators, spotters, crewmembers and fans who all needed to get to a safer place.

“We’ll get back on the track tomorrow for practice, and I feel confident we’ll have a fast Quick Lane Ford Fusion on Sunday.”

Sunday’s race is set to get the green flag just after 1 p.m. (2 p.m. Eastern) with TV coverage on Fox Sports 1.