Truex Jr. Roars Back to Finish 4th in Martinsville 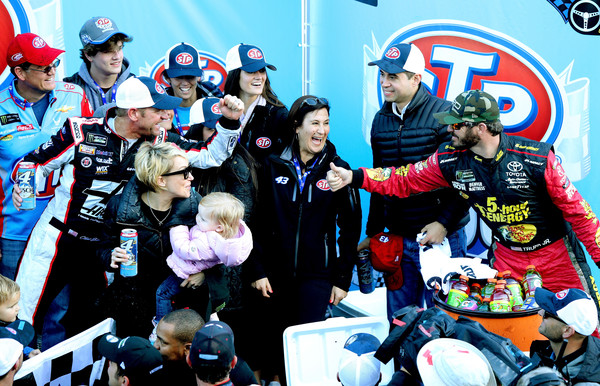 After experiencing serious handling issues during the first half of the race, Martin Truex Jr. came roaring back in his No. 78 5-hour ENERGY/Bass Pro Shops Toyota to finish fourth in Monday’s weather-delayed STP 500 at Martinsville Speedway.
It was the fifth straight top-five finish for the Furniture Row Racing driver.
Truex’s handling issues were evident early as he was blanked in acquiring points in both of the first two stages with finishes of 11th and 14th.  The anomaly for Truex to get shutout with stage points had an impact as he dropped to second in the driver standings, eight markers behind leader Kyle Busch.
“It was real down for a while,” said Truex, who started the 500-lap race from the pole. “We started the race pretty fast on the short runs, it was just the long runs that were eating us up. I just couldn’t keep the rear tires on it at all on the long runs. For a while we were dropping like a rock and I am like it’s going to be a long day. We had to make some really big adjustments after stage two and luckily I was able to drive back through the field.”
Crew chief Cole Pearn, sitting atop the pit box, made some key adjustments to the 5-hour ENERGY/Bass Pro Shops Camry, which allowed Truex to gain track position on the 0.526-mile short track.
“The last two runs of the race we were really strong, particularly the run right before the last caution,” Truex explained. “We were really fast the entire run. I was able to make some gains and get track position. We tried to make it better but we got worse again.
“Proud of the guys for sticking with it. All of us put our heads together and didn’t give up on it. So proud of that and we’ll get that short-track win sooner or later. This is probably our worst out of all of them, so fourth isn’t too bad.”
The result was Truex’s fifth top-10 finish in his last seven races at NASCAR’s shortest track.
The race winner was Clint Bowyer. Rounding out the top-10 in order were: Kyle Busch, Ryan Blaney, Truex, Kevin Harvick, Joey Logano, Alex Bowman, AJ Allmendinger, Chase Elliott and Brad Keselowski.
The race had four cautions for 33 laps and there were 11 lead changes among six drivers. Truex led the first four laps.
The NASCAR Cup Series will have Easter weekend off and resume action Sunday April 8 at Texas Motor Speedway in Fort Worth.
FRR PR/Photo Jerry Markland/Getty Images