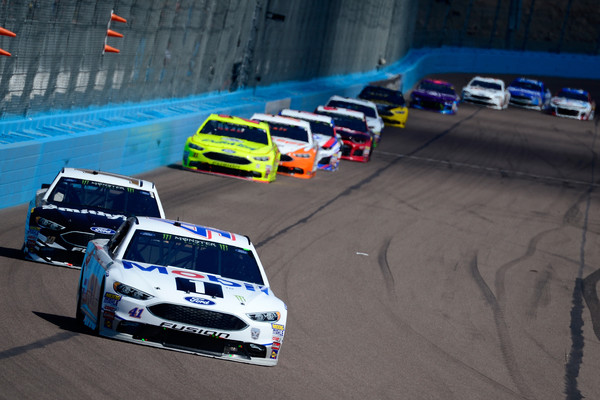 ● The 2004 Cup Series champion pitted on lap 79 for four tires and fuel but no changes to the racecar.

● While fifth, Busch pitted on lap 123 for four tires and fuel and rejoined the raced in fifth.

● After a late caution, some leaders decided to pit and Busch found himself in first place. On a one-lap restart, Busch held off Brad Keselowski and won Stage 2.

● Busch pitted on lap 153 for four tires and fuel.

● Busch pitted on lap 259 for four tires and fuel while running 11th.

● Busch led once for six laps to bring his laps-led total at Phoenix to 757.

● Busch finished eighth in Stage 1 to earn three bonus points. He won Stage 2 to earn an additional 10 bonus points and one playoff point.

● There were six caution periods for a total of 36 laps.

● Kevin Harvick won his 40th career Cup Series race, which puts him in a tie with NASCAR Hall of Famer Mark Martin for 18th on the all-time NASCAR Cup Series win list.

● This was Harvick’s third Cup Series win of 2018 and his series-best ninth at Phoenix.

● Harvick’s margin of victory over second-place Kyle Busch in the TicketGuardian 500k was .774 of a second.

● This is the first time SHR has placed all four of its drivers in the top-10 in a single race.

“The car responded well to my steering and gas inputs. I was a little slow on restarts, but I love being able to lean on the right-rear tire and make passes later in the run. Our strategy unfolded the best it could have to win Stage 2 and get back in the top-10. We just didn’t run the same lap times we did at the end as we did at the beginning of the race, but all in all it was a good day.”

The next event on the Monster Energy NASCAR Cup Series schedule is the Auto Club 400 on Sunday, March 18 at Auto Club Speedway in Fontana, California. The race starts at 3:30 p.m. EDT with live coverage provided by FOX.