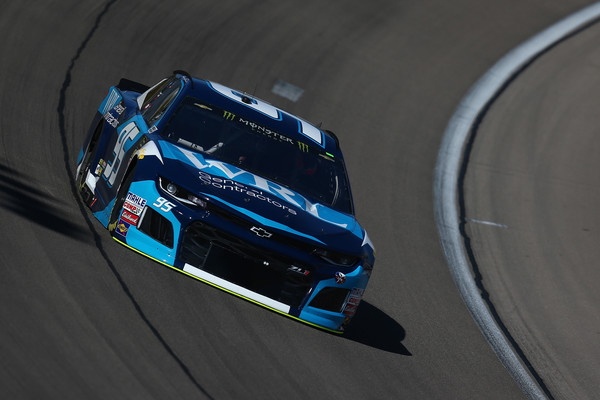 The team began the weekend with a 21st place qualifying effort on Friday and found more speed on Saturday during the final two practice sessions.

At the start of the Pennzoil 400, Kahne dropped back a few spots and settled in the 24th position, as he reported that his No. 95 WRL General Contractors Camaro ZL1 was extremely loose.

Crew Chief, Travis Mack, worked to come up with a plan, as the team made their first green flag pit stop on lap 39. The No. 95 crew took a pound of air out of the right rear tire to help with grip, but Kahne reported that it was not helping.

After finishing the first stage in 19th, Kahne pitted for another major adjustment. He began the second stage a lap down and racing for the Lucky Dog spot. He raced until lap 123 when he made his second green flag stop for a right side rear chassis adjustment as he began to get better on the long, green flag runs.

Kahne finished the second stage in 23rd and two laps down. Crew Chief, Travis Mack, called for the wave around to earn a lap back and start the final stage one lap down in 22nd.

Kahne raced until a caution came out with 91 laps remaining, which allowed him to pit for tires, fuel, and a right front shock adjustment. As another caution came out just a few laps later, he pitted once again for tires and fuel.

With under 50 laps remaining in the race, Kahne reported the handling was much better in his No. 95 Camaro ZL1. He made it as high as 12th place as the green flag pit stops began to cycle through. Kahne made his final green flag stop with 18 laps remaining and went on to finish 19th, earning LFR their first Top-20 of the 2018 season.

“We really battled with the front end and getting it to turn,” said Kahne. “It was quite a handful, but the guys definitely made it better. We stayed after it the whole time and ended up with a Top-20. I just wish we were a little better and had a little more speed. It was definitely a long race.”

Next up for Kahne and LFR is ISM Raceway in Phoenix, Arizona for the second race of the West Coast Swing.