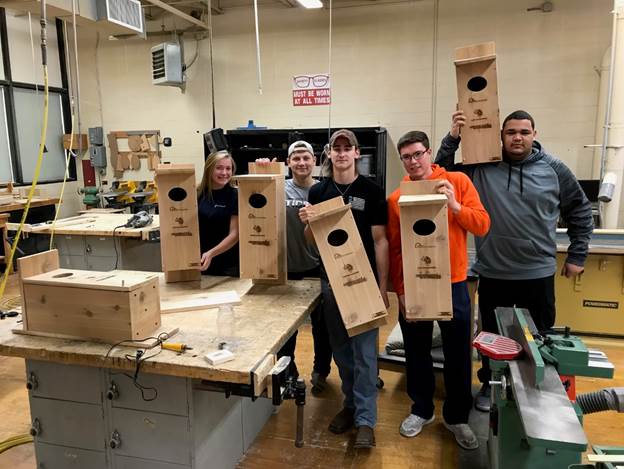 As Chicagoland Speedway and Joliet Township High School (JTHS) entered their seventh consecutive year of partnering on curriculum development, they proudly announced that Ducks Unlimited, the world leader in wetlands and waterfowl conservation and partner of Chicagoland Speedway, would join the collective effort to support the innovative curriculum project. This year’s project provided Environmental Science students the opportunity to create Wood Duck Nesting Boxes that will be installed at the Des Plaines Conservation area Thursday, March 8.

“Every year our partnership with Joliet Township High School continues to grow, giving students an opportunity to apply practical skills in a real-life setting,” said Scott Paddock, President of Chicagoland Speedway. “This year, we were able to leverage our partnership with Ducks Unlimited to give students a great learning experience while enhancing a conservation area in their own backyard.”

For the past five months, JTHS students have worked closely with Ducks Unlimited and Chicagoland Speedway on the Duck Nesting Boxes through the guidance of Ducks Unlimited Biologist Michael Sertle, the Illinois Department of Natural Resources, ILDU Youth and Education Chairman Vicki Mandurano and IL DU State Chairman Dennis Wooten.

“Ducks Unlimited is both excited and honored to partner with Chicagoland Speedway and JTHS to introduce students to the living world around them,” said Dale Hall, CEO, Ducks Unlimited. “By studying the life cycles of ducks, as well as the food they eat, a new generation of conservationists will be ready to do their part in making sure these natural resources remain strong and abundant.”

In November the materials were delivered by Illinois Ducks Unlimited State Chairman Dennis Wooten to JTHS and the assembly began. Complete with Chicagoland Speedway, Ducks Unlimited and JTHS logos engraved by Wooten on the boxes, they will be installed at the Des Plaines State Fish and Wildlife Area, where students will continually monitor them and maintain the boxes.

“Working with Ducks Unlimited and Chicagoland Speedway to educate and implement a program that leads to increased awareness surrounding our local environment has been a wonderful experience for Joliet Township High School students, said Jeff Riley, Director of Strategic Partnerships, Joliet Township High School District 204. “In collaboration with leading experts in their field, our students were able to authentically apply what they have learned in their Construction Occupations, Woods Technology, and AP Environmental Science classes.”

In addition to the curriculum integration, which allowed students in Advanced Placement Environmental Science to gain real life experience in the areas of conservation, natural resources and community outreach, all of the students in the course will have the opportunity to apply for a $2,500 scholarship.

The complete 2018 NASCAR schedule at Chicagoland Speedway is as follows: