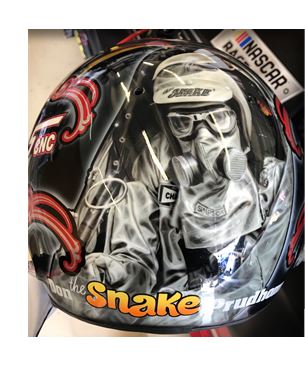 Just about every NASCAR driver is dependent on his race team and its corporate partners to pick out the color scheme for the car the fans see at the track and on television each weekend.

Drivers are sometimes consulted on the car’s paint scheme, but the folks paying the bills always get final say. The car is their space, but a racing helmet is a driver’s own territory where he can stamp his own personality. That’s led every driver in the Monster Energy NASCAR Cup Series to sport a commissioned helmet design they have often worn for years and fans can easily identify.

Clint Bowyer is no different, except he’s taken his personal space on his helmet another step.

“Ever since I started in the Cup Series, I have always tried to put someone on my helmet who meant something to me growing up,” said Bowyer, a 38-year-old native of Emporia, Kansas.

“Whether it’s Elvis (Presley), Smokey Yunick, Johnny Cash, Clint Eastwood, George Jones or someone else, I like to honor the folks who influenced me and meant something to me as I was growing up, whether it’s in racing or not.”

This weekend, when Bowyer drives his black-and-red No. 14 Haas Automation Ford at ISM Raceway near Phoenix, he’ll wear a helmet that carries all the logos of his partners incorporated into a cool design by his longtime helmet painter Nick Pastura. And the back of the helmet includes a Pastura painting honoring drag racing hall of famer Don “The Snake” Prudhomme – a childhood hero of Bowyer’s.

“I met Don a long time ago and fell in love with him,” Bowyer said. “The guy is awesome. He is a hero of mine. As I grew up, my father (Chris) and all his friends were drag racing buddies and big fans of Prudhomme. So, just to see Snake and meet him was cool. He knew me and that’s quite an honor. I couldn’t believe that. We’ve had a lot of fun over the years with him. The ‘Old Snake’ is a pretty cool cat.”

Prudhomme, 77, earned his “Snake” nickname for his lightning-quick, starting-line reflexes that led the NHRA to name him its third greatest driver in history. Bowyer said Prudhomme has visited NASCAR tracks on several occasions in the last few years and still watches most of the race broadcasts.

Bowyer hopes to take the Prudhomme helmet to victory lane this weekend at the track that was renamed in the offeason from Phoenix International Raceway. No matter the name, Bowyer’s Stewart-Haas Racing (SHR) team salivates when it’s time to race at the fast, mile oval in the Arizona desert.

SHR has enjoyed five trips to victory lane in 54 races at Phoenix during the team’s 10-year existence. The Kannapolis, North Carolina-based team co-owned by Gene Haas and Tony Stewart also owns 16 top-fives, 23 top-10s and one pole at Phoenix. SHR arrives there after consecutive victories by Kevin Harvick at Atlanta and Las Vegas.

Bowyer hopes he can add his name to SHR’s 2018 victors list at Phoenix.

“I like going to Phoenix,” said Bowyer, who owns two top-five finishes and six top-10s and has led 22 laps at Phoenix. “It’s a great city and the racetrack there produces some of the best races we’ve seen the last couple of years. Phoenix has always been kind of unique to itself. I think it always will be. Short-track racing is always a lot of fun. I wish we had five more tracks just like Phoenix.”

Bowyer arrives at Phoenix with momentum after running well in the season’s opening three races. A 15th-place finish at Daytona coupled with a third-place finish at Atlanta and an 18th at Las Vegas has Bowyer in 11th place in the driver standings as the Cup Series readies for the second of its three-race western swing that concludes next week at Auto Club Speedway in Fontana, California.

“The key to success at Phoenix is just having a good, neutral racecar,” Bowyer said. “Both ends of the track are quite different with turns one and two being a pretty tight arc and turns three and four being a pretty open, sweeping corner. So, there’s really no perfect setup. You have to find a happy medium with good balance, and then find a middle ground. After that, it’s track position that’s important. You have to qualify well and make sure you stay up front.”

If he stays up front until the checkered flag falls, Bowyer will make Don “The Snake” Prudhomme proud.